Escondido baseball has a new look

Last decade lean for Cougars, who opened this season with a 15-1 record 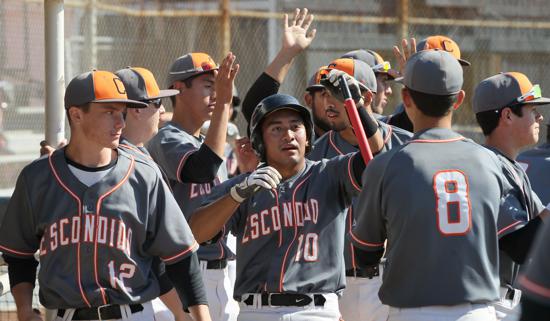 Escondido's Gustavo Cervantes (middle) is greeted by teammates after scoring on Kellen McCoy's double in a win over San Dieguito.

ESCONDIDO — It was one of the proudest, most-respected programs in the county, sending seven players to the big leagues.

Over the past decade, however, Escondido High baseball has fallen on hard times.

Things started to turn last year when the Cougars finished 16-16. The team has busted out of the gate this season with a 15-1 record, winning 13 in a row heading into today’s home game against San Dieguito.

The Cougars are a Division III team. And while the schedule hasn’t exactly been a trip through the AL East, Escondido won the 3A Division of the Lions Tournament with victories over Clairemont, Sage Creek in the semifinals and Bishop’s in the title game.

Plus, there are wins over Fallbrook, Valley Center and El Camino.

“We had a lot of good players my sophomore year,” said Escondido senior outfielder Austin Rieman. “But we had some cancers on the team. We got rid of all that, and it shows.”

“This coaching staff has seven CIF titles under its belt,” said Tommy Cheek Jr. “So we know the game.

“The kids have become sponges. The energy level from last year to this is night and day. Everything is geared to winning a CIF championship.”

The team’s practices are scripted and crisp.

There are daily classroom sessions — 10-15 minutes at most — where players are quizzed and players and coaches have solid exchanges.

“Each player’s locker has a motivational quote over it,” said Hoofard. “We want the kids to look those up, know what they mean and stand for.

“We hold players accountable. We want them to know it’s their team, and they have a voice.”

Accountability is great. Nothing, however, happens without good players.

Rieman and Ben Donnelly are hitting over .500. Six other regulars are well over .300.

“The coaches asked us to buy into the program,” Rieman said. “And we have.

“We have great teachers. It’s up to the seniors to learn and teach the young guys the right way to do things.

“That was especially important in the winter when all three levels — varsity, JV and freshmen — were together.

“Really, it brings great joy to see the young guys listening, to see they love being here.”

Moskowitz, who started eight games for the basketball team and figures to be a full-time starter next season, has allowed just 18 hits and six walks in 38 innings.

The battery of senior Gustavo Cervantes and his brother, Juan, a freshman pitcher, has been spectacular.

“I’m a baseball player who plays basketball,” Moskowitz said. “I want to be a good basketball player, but I need to find a way to put in more time getting ready for next baseball season while I’m playing basketball.

“I’ve always been a strike thrower, but I’m not overpowering. So I have to rely on my defense to make plays.”

Moskowitz has a fastball clocked at 84-87 mph. His infielders are third baseman Brenden Garcia, shortstop Kellen McCoy with Donnelly at second.

“I won’t lie, wins are important,” Hoofard said. “But it’s not all about wins and losses.

“I think we’re on the right track.”

San Diego State football coach Rocky Long will be the guest speaker Saturday at the Escondido High Cougar Club breakfast. The event — open to past and current Cougars — is at Cocina del Charro restaurant, 890 West Valley Parkway. Doors open at 8 a.m. There is a $12 charge.