Vista catcher frustrated after losing out on scholarship to Arizona, but Cal might be a better fit 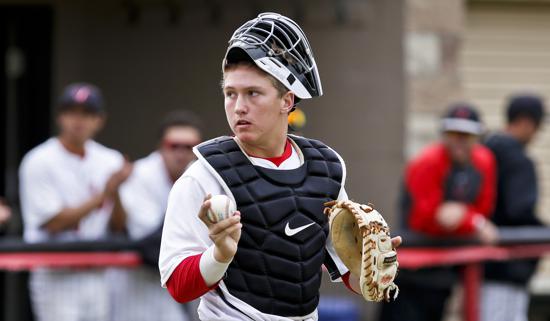 Vista catcher Korey Lee is already looking forward to the day when his Cal team plays Arizona in Pac-12 baseball.

His mother, Lisa, made sure of that.

It was an even longer ordeal that eventually landed Korey at Cal.

“When he started deciding where he wanted to go, I told him that he needed to take the coaching staff and team out of the equation and love the college first,” Lisa said.

Korey, a first-team All-Avocado West League pick as a junior, said his pairing with Arizona was a “match made in heaven.”

Just four months after his commitment, though, Arizona baseball coach Andy Lopez announced his retirement. It was a move Lisa and Korey never saw coming.

Last September, however, Lisa said she got a call from Johnson, informing her that the team was going to pull Korey’s scholarship offer.

Lisa then had to relay the message to Korey after he got out of school that day.

Johnson, who had four catchers on scholarship and apparently didn’t want to add a fifth, did not return messages seeking comment.

“It was heartbreaking,” Lisa said. “Korey had many, many offers and when he decided on Arizona, he decided to go there not for baseball, not for the coaches, but school first.”

Korey was forced to reopen his recruitment, which meant entering more showcases and tournaments. The 6-foot-1, 190-pound senior had to quit water polo in the fall, which he had played the first three years of high school.

“I had a few times where I was just like, ‘What is going on? Why is this happening? What did I do wrong?’” Korey said.

Lisa said Korey was understandably upset for about a week but then got back to work trying to earn himself another scholarship.

The effort paid off when he accepted an offer from Cal.

“He’s an advanced defender with a great catch and release,” Esquer said. “We liked what we saw with his bat. He certainly has a short, quick stroke with the power potential as well.

“For us, he’s perfect. He plays right into our offensive philosophy. We’re not pure small ball. We like a little hybrid with power. Also, we know how important our catching is to our pitching.”

Esquer said Cal scouted Korey before he committed to Arizona and resumed the pursuit when the Wildcats pulled their offer.

“Korey is just such a character kid, which was the final piece for us,” Esquer said. “He can be a great baseball player, but that was the thing that really sold us. He was sort of a must-have.”

Staying in the Pac-12 gives Korey a chance to play the school that gave up on him — every season.

“It’s going to be personal there,” he said of going against Arizona.

Korey’s relief of knowing where he’ll be playing college ball has translated to the diamond for Vista this season.

Entering the week, he’s batting .333 for the Panthers, who are 12-5 with a Lions Tournament Premier Division title this spring under second-year head coach Ricky Imperiali.

Though she remained hopeful, Lisa wasn’t real confident Korey would find another fit like Arizona.

Now, both believe the senior backstop is actually better suited at Berkeley.

“It’s a better fit for me,” Korey said. “It’s the second go-around and I feel more comfortable with it.”