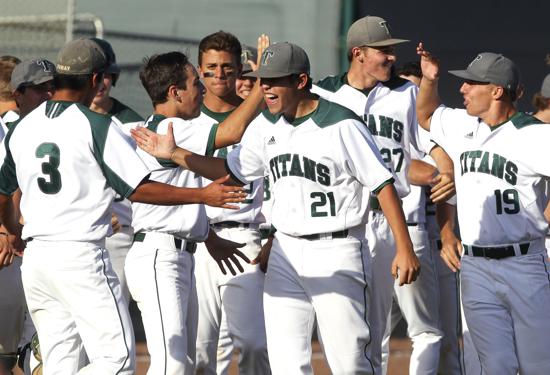 POWAY — A new year, with a lot of new players, led to early-season struggles for the Poway High baseball team.

“He came to see us play Green Valley in the last game of the Lions Tournament (on March 24),” Poway coach Bob Parry said. “Not only did he talk to the team, he stayed for the whole game. He stayed in the dugout, encouraging guys, telling them what to look for.”

Whatever Gwynn said has worked. After a 2-6 start, the Titans haven’t lost since Gwynn’s visit, winning 10 in a row.

The lastest victory came Wednesday in dramatic fashion. Trailing by five runs in the bottom of the seventh, the Titans broke out with seven hits, capped by Sloan Blanscet’s double to left-center field, as Poway stunned No. 6-ranked Torrey Pines 7-6 in a Palomar League game.

“We have a lot of new guys and, early in the season, we weren’t playing as a team,” Blanscet said. “We were playing for our stats.

“The seniors got everyone together and said we had to strive to play together. We had to man up.”

For six innings, Torrey Pines left-hander Max Spencer had the Titans baffled. Throwing about 75 percent breaking balls, Spencer had allowed one run and induced 10 ground-ball outs and two popups, with only two strikeouts.

But the bottom of the order sparked Poway (12-6, 4-0) in the seventh, as Deron Johnson and Ryan Gagliano singled. After a pitching change, Torrey Pines (12-6, 2-2) recorded the first out of the inning on a popup.

With Pellegrino running, Blanscet hammered a fastball to the fence in left-center, scoring the tying and winning runs.

“I wouldn’t call this our best win, but I’d call it our most memorable win,” Blanscet said. “The best wins are when we play as a team from the first through the seventh innings. We didn’t do that today. We lost our focus in the early innings.

“We had scored six runs in an inning before, so we know it wasn’t impossible. We just weren’t ready to lose.”

Torrey Pines let a seventh-inning lead slip away for the second time this season. The Falcons led Mission Hills 5-2 with one out in the seventh earlier in the season, and lost.

“This kind of thing is going to happen in a long season,” Torrey Pines coach Kirk McCaskill said. “In baseball, you’ve got to get all 21 outs.

“Give Poway credit. They were in a deep hole and crawled out. Now we’ll see who we are.”

Poway will travel to Torrey Pines for a doubleheader starting at 10:30 a.m. Saturday.