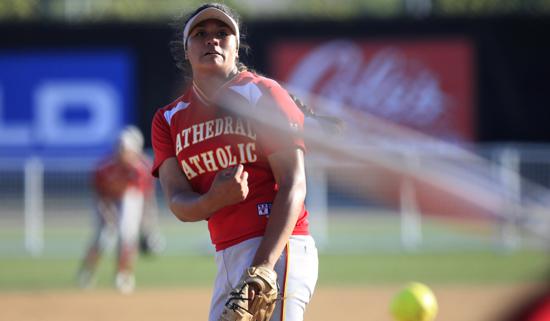 Megan Faraimo saw something she had not seen in more than three weeks.

After a 22-day absence, the 6-foot-1 sophomore right-hander pitched a two-hitter with 13 strikeouts in Cathedral Catholic’s 2-0 victory over Clairemont this month as the Dons went on to clinch the Western League title.

Faraimo, a first-team All-San Diego Section performer as a freshman, was supposed to start the game and pitch three innings. Senior Devyn Magnett, who won all eight games Faraimo missed and is now 14-2, was on call in the bullpen.

It was the best moment of this softball season for Faraimo, who sprained her right ankle last month in a fall while walking from the Wave club volleyball practice facility to the car.

“What a relief to pitch again,” Faraimo said. “I don’t know how much longer I could have stayed on the bench, taking stats and cheering my teammates on.

“I was out for so long I was nervous. I wanted to be on the field so badly.

“Sitting out was as bad as it can get, at least for me. It sucks being on the bench.”

Faraimo is ready to go as sixth-seeded Cathedral Catholic (24-3-1) prepares to play at No. 3 San Marcos (19-4-2) in the first round of the Open Division playoffs Wednesday. The Dons, who are No. 1 in media rankings, enter the postseason with an 18-game winning streak.

After losing last year’s section Open Division championship game 1-0 to Poway, she stands 8-1 this spring with an almost nonexistent ERA of 0.10. She has 126 strikeouts in 721/3 innings, limiting opponents to a .098 batting average.

Already committed to UCLA while older brother Matthew is committed to rival USC for boys volleyball, Faraimo had just been nominated for the Gatorade National Softball Player of the Year award when she tripped and fell at volleyball practice.

“I used to play basketball and dance when I was younger and trust me when I tell you I didn’t look good dancing,” Faraimo said. “I’m not very graceful.”

Make no mistake about it. Faraimo is every bit as good on the volleyball court as she is a softball player.

That’s what makes it so strange that her clumsiness leaving a volleyball practice cost her so many softball games.

“Softball is more of a mind game,” Faraimo said. “Volleyball is just kill the ball.

“When I’m on the volleyball court, I miss softball.”

Though she appears in top pitching shape again, Faraimo is not done with her rehabilitation.

There are still trips to the trainer’s room several times a day, before practice and games and again afterward.

And this latest injury should curtail her activity on the bases, where she made a couple now-infamous miscues.

“In my first game here I made two base running errors,” Faraimo said, smiling and casting a glance toward Dons coach Margaret Mauro.

“I’ve seen pitchers yell at teammates over an error, but not Megan,” Mauro said. “She’s such a competitor and that’s why the best part of her game is the mental side.”

In last year’s finals, Faraimo surrendered the game’s only run in the first inning, and Poway’s Kourtney Shaw made it stand up as the Titans edged Faraimo’s Dons.

“I’m still not over that loss because we wanted to win it for the seniors,” she said. “It was so sad to see their faces after the game.

“I was really nervous. Coach said it was OK to be nervous, just not scared.

“I cried after that game. I just went home, showered and went right to bed. We had worked the whole season for that moment and we let it get away from us.”

That’s why Faraimo has been on a mission to get the Dons another shot so this senior class won’t graduate without a section title.

Everything was going great until she was injured, though the Dons have not missed a beat waiting for her return.

“I feel 100 percent, although I know I’m probably not,” Faraimo said.

Faraimo at less than full strength figures to be better than most pitchers at 100 percent.