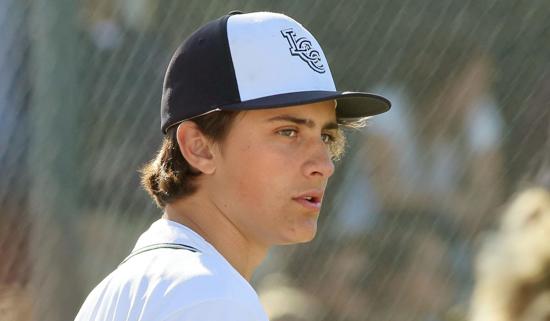 CARLSBAD — John Dutton is in his first year as pitching coach at La Costa Canyon High.

“And I couldn’t have walked into a better situation,” said Dutton, a left-hander, who played at Rancho Bernardo and was a 24th-round draft pick of the Los Angeles Dodgers in 2006.

“Justin Machado (the Mavericks’ head coach) lets me do my thing. And I have three senior pitchers who have been lights out.

Nick Scheidler is the left-hander.

He was 7-1 with a 2.27 ERA at the end of the regular season with 41 strikeouts and only 15 walks in 491/3 innings for the Mavericks, who entered the San Diego Section Open Division playoffs as the No. 1 seed.

“Coach Dutton has brought this staff together,” said Scheidler, who has signed to play next season at UCLA. “He really knows the ins and outs of pitching.

“We have a great hitting team, so we don’t have to worry too much about being too fine with our pitches. We trust him and we trust the team.

“Playing at LCC has been the best time of my life.”

The 6-foot-2 Scheidler throws a two-seam sinking fastball and a four-seam riding fastball. Both sit at about 87 mph.

He calls his curve his “out pitch, something I can throw for a strike at any time on any count.” His change-up is a splitter and is a work in progress.

Brendan Kawaja is the submariner.

The 6-5 Kawaja credits former Vista High coach Butch Smith with dropping his arm angle down from three-quarters to submarine.

“It’s all about sink and sail on the fastball,” said Kawaja, who has signed to play at Loyola Marymount. “I want to pitch in on the hitters and get groundballs to my infielders.

“Dutton preaches busting hitters inside and changing their eye level.

Kawaja’s fastball sits at 85 mph. He throws a circle change and a slider.

“This is a great staff,” Kawaja said. “Nick and I cheer for each other, but there is a friendly competition.

“The guy who has been a surprise is Austin Merrill.”

In 401/3 innings, Merrill — who wasn’t on the varsity last season — has walked 11 with 38 strikeouts and has several colleges buzzing around.

“We have a lot of good pitchers, but Merrill has been a guy who has stepped up big time,” said Dutton, who was the pitching coach for the LCC freshmen and JV teams before joining the varsity this season.

“They have worked very hard and they have a great team behind them.

“They’ve had awesome success and grown mentally as the season has gone on.

“What I’m thankful for is that they clicked with me.”