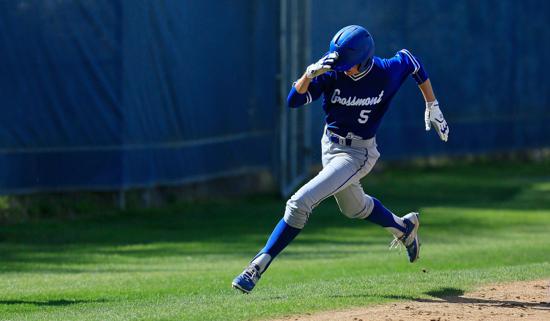 EL CAJON — Just two days after the most bitter outing of his young baseball career, after allowing a three-run homer in the bottom of the seventh inning Wednesday at Eastlake, Kannon Romero could have run off and hid.

Instead, the junior bounced back with a six-hit, seven-strikeout complete game as Grossmont stayed alive in the Open Division on Elimination Saturday with a 10-2 win over La Jolla Country Day.

The fifth-seeded Foothillers (22-11) advance to Tuesday’s fourth round and must beat No. 4 Eastlake twice to advance to the San Diego Section championship game June 4 at USD.

On the other side of the bracket, No. 2 Rancho Bernardo got a three-run walk-off homer to edge Helix 7-6. RB hosts No. 3 Cathedral Catholic on Tuesday and must beat the Dons twice to reach the title game.

“I was a little nervous at the start of the game, and we got behind,” said Romero, who improved to 7-3. “But I settled down.

“I got more ground balls, let my defense work. And once we got the lead, it became a lot easier.”

Trailing 2-0, the Foothillers got a run in the third, four in the fourth, four more in the fifth and added a run in the sixth.

Steve Ouellette, who went 4-for-4, had the big blow in the fourth, a two-run single.

Kyle Pineda, who had four RBIs on the day, had a three-run homer in the fifth.

“Kannon was outstanding, but he has been outstanding all season,” said Grossmont coach Jordan Abruzzo.

“I knew he’d bounce back from giving up that home run because he’s so mentally tough. I expected him to pitch well.

“When we got him some runs, then he got comfortable.”

Romero retired the final eight hitters and 15 of the final 16.

“Our seniors don’t want this season to end,” Abruzzo said. “When we got down, they picked up the energy in the dugout, got us moving.”

“We strung a few hits together, got some clutch hits and took back the momentum.”

La Jolla Country Day had all the momentum through the first three innings with AJ Dhus driving in a run with two outs in the first and Brandon Nance hitting a long homer to start the third.

But the top and bottom of the Grossmont batting order terrorized the Torreys.

“We made a few mistakes, and they took advantage,” said LJCD coach John Edman. “Make no mistake, Grossmont is good.

“We were honored to play in the Open Division, but the key was to win Friday and not have to play today.”

LJCD beat top-seeded La Costa Canyon in the first round and held a 4-0 lead on Eastlake before losing 6-5 in the second round.

Grossmont lost to Eastlake 6-5 in nine innings in the first round before eliminated La Costa Canyon.

“We had our shot,” Edman said. “But we played well against some of the best teams in the county.”