Foothillers keep cool in the end 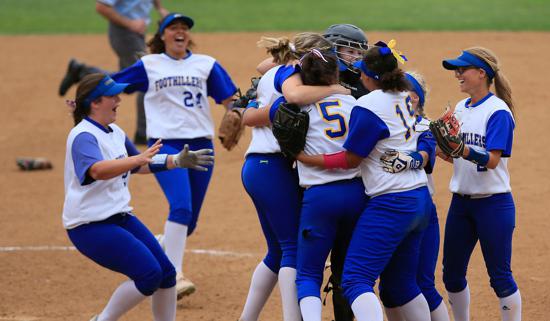 With a four-run lead in the top of the seventh inning, top-seeded Grossmont High needed only three outs to end a five-year championship drought in softball.

But No. 5 University City didn’t make it easy, rallying for a pair of runs before freshman pitcher Samaria Roope induced a comebacker for the final out to clinch a 5-3 victory over the Centurions for the San Diego Section Division III title Saturday at UC San Diego.

“This is all new to me and all amazing,” Roope said. “This feels a lot better than I thought, but it probably won’t hit home until much later.”

Roope, who gave up two first-inning hits for a run, held University City (21-11) scoreless until Alexi Wyckoff’s two-run single sliced the deficit to two runs, leaving the go-ahead run at the plate with two outs.

When it was over, Roope had allowed six hits while striking out five for Grossmont (23-10).

The Foothillers took a 2-1 lead on Megan Malwitz’s solo home run to open the fourth inning. Chloe Camarero singled in one run, a second run scored on an error and Taylor Baez’s single chased home the fourth run for a 5-1 lead.

“After the first, I told myself they wouldn’t score again,” Roope said. “The seventh just got away from me. I guess I was looking forward to that last out too much.

“I didn’t panic, but one more run and I would have.”

Camarero and Baez were both 2-for-4. Baez drove in two runs and Camarero had one RBI.

“I feel really good the seniors will leave with a championship patch,” Roope added.