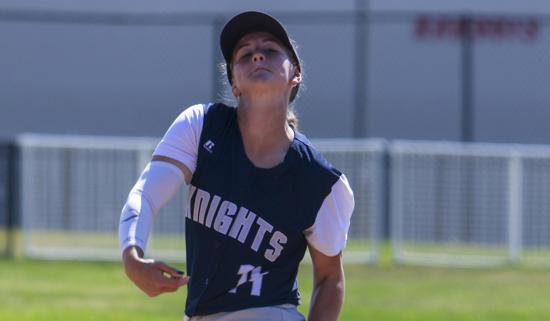 It was the young kids against the veterans.

This time, the kids won.

San Marcos High, which made its last title appearance in 1998, held on at the end with the bases loaded for a 7-6 victory over defending champion Poway in the San Diego Section Open Division softball championship game Saturday night at UC San Diego.

Knights sophomore Payton Tidd needed 128 pitches to finish off a seven-hitter that left her with a 19-1 record for the season.

“The whole night was a struggle,” Tidd said. “This championship will bring back a lot of good memories years from now.”

In the fifth inning, the Avocado East League champion Knights had the first five batters score to take a 7-3 lead.

Stanzione, who was 3-for-3 with two RBIs, got it started with a single. Nyssa Williams was hit by a pitch and Cassidy Stroh’s bunt was mishandled, loading the bases.

The final run in that inning scored on an error.

Poway loaded the bases in the sixth inning on singles by Gabby Callaway, Samantha Johnson-Needham and Taylor Riley. A walk to Morgan Lutticken made it 7-4. A walk to Dana Stewart, the ninth hitter in the lineup, made it 7-5. Sydney Steele walked to make it 7-6.

Brooke Hanavan’s line drive was speared by Tidd as it was heading to center to end the threat.

In the seventh inning, with the bases loaded, Tidd induced a ground out to start the celebration.