When not playing, Broncos sophomore is watching with family 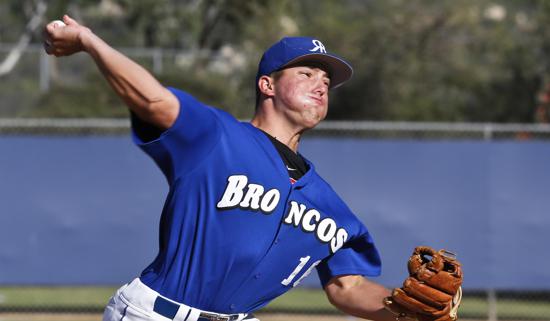 Joey Magrisi was 8-1 with a 1.11 ERA for the Broncos during the regular season.

As far as Joey Magrisi is concerned, there is no such thing as too much baseball.

He’s been a baseball junkie almost since birth. He started playing when he was 3.

If you walk into the Magrisi home, you’ll see just one channel on. It’s the MLB Network.

“Baseball is all I watch on TV,” the Rancho Bernardo High sophomore pitcher said. “My parents love that.

“It’s not unusual for all of us to sit around on the couch watching a game and eating sunflower seeds for hours.”

Magrisi burst on the high school scene last season as a freshman. He waited his turn until he got the call in the fourth game against Santana.

The 6-foot-1 right-hander pitched three innings as the Broncos scored a run in the top of the seventh for a 4-3 victory.

“I was so pumped,” Magrisi said. “It was the chance I’d been waiting for.

“As a pitcher, I love that moment.”

Magrisi’s best moment in 2015 came when he got the starting nod in the San Diego Section Open Division championship game at Fowler Field at USD.

He went five innings before yielding to all-section right-hander Drew Finley as Rancho Bernardo captured the crown with a 3-2 win in eight innings over La Costa Canyon.

For a guy who loved making the varsity as a ninth-grader, starting the championship game went way beyond his wildest dreams.

“I sure didn’t expect to get that call,” Magrisi said. “Winning the championship as a freshman seemed so out of reach, but winning was the best feeling ever.”

“Baseball is in his DNA,” said Rancho Bernardo coach Sam Blalock, the county’s all-time leader in victories. “He was probably this competitive when he was 5.

“We tried to start him slowly, but by the end of the season he was right there with Finley.”

He’s been almost as good this season, posting an 8-2 record with a 1.84 ERA, five complete games and 60 strikeouts in 61 innings during the regular season.

Magrisi’s worst moment this season came last month in the third and final game of the week against rival Poway.

The Broncos lost a 5-3 lead in the seventh inning as the Titans, Division I champions last spring, scored three runs to win two of the three games.

“Baseball can be so humbling,” Magrisi said. “You can have a big day and then the next day hit a big bump.

“I just have to wear it and come back stronger.

“No one likes to lose. I don’t. We train to win games. When you lose games, especially games with so much at stake, it’s heartbreaking.”

Magrisi said he’s always been a guy who can turn the page on a bad game or a frustrating loss.

“I learned a long time ago you’ll have a million bad days, but who comes back the quickest from a loss will determine who winds up on top,” Magrisi said. “You can stew about a bad game, but the next game suddenly becomes more important.”