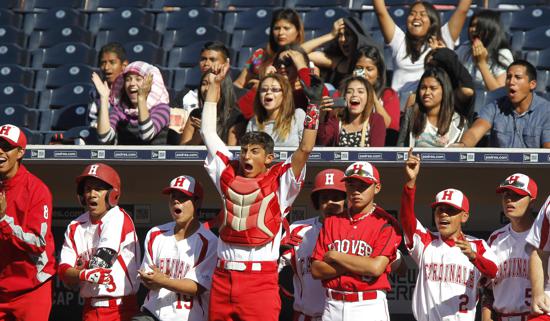 Baseball at Hoover High will always be held to a high standard.

It’s the school that produced Ted Williams and five San Diego Section championships through the years.

But the last time the Cardinals won a title was 1983.

On Friday, sophomore pitcher Miguel Carrillo hit and pitched top-seeded Hoover to a 5-0 victory over No. 2 San Diego Jewish Academy to capture the Division V crown at UC San Diego.

“When I took this job this school was starved for winning,” Cardinals coach Sean Tucker said. “I didn’t know what would happen this year, but there was a lot of support for this team from all the alumni.

“Hoover has a great baseball tradition and I’m thrilled to be a part of that now.

“It’s the pinnacle of my career.”

Carrillo pitched 61/3 innings, allowing just four hits, walking none and striking out seven to improve his record to 9-1.

Senior second baseman Lewis Butler came on to record the final two outs, the last one on a pop out to Carrillo at second base.

Hoover (24-7) led 2-0 courtesy of an RBI triple by Carrillo in the first inning followed by an infield single by catcher Oscar Avila.

That’s when Carrillo made a key play in the game. Jordan Battaglia tripled to open the sixth inning for San Diego Jewish (21-6), but Carrillo picked him off.

It was the Lions’ last threat as their nine-game winning streak ended.

“Before the first pitch I saw he was celebrating,” said Carrillo, who was 2-for-3 at the plate. “He was distracted so I called the play.”

Hoover, which was eliminated in last year’s semifinals, added three runs in the bottom of the sixth for insurance.

“When we won the game to get here, there was no celebration,” Tucker said.

Carrillo, in his first year on varsity, heard all about last year.

“The guys told me how close they got,” he said. “I heard about that all the time.

“This was our year.”