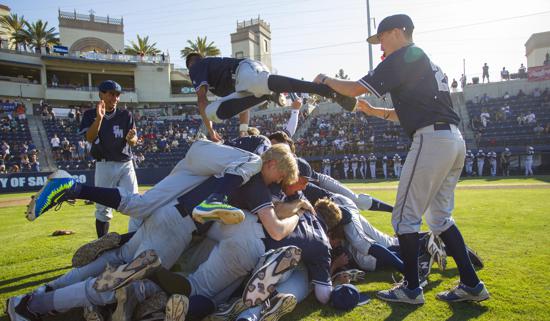 Jacob Blas picked a great game to have a career day.

The junior shortstop went 3-for-3, scored a pair of runs — one from second base on an infield ground out — and drove in two as San Marcos High scored a 9-2 win over Scripps Ranch in the San Diego Section Division II baseball final Saturday at USD.

“This is the greatest feeling of all time,” Blas said. “This is the most-special group of guys I’ve ever been around.

“From the first day of practice we went to work on winning this.”

In the third inning, he stroked a one-out double. With Jeremy Murphy at the plate, Blas got a huge jump off second as Murphy hit a two-hopper to the second baseman.

“Our team is aggressive, and I was trying to be aggressive,” Blas said. “We run, we steal, we take the extra base.

“We try and make the defense uncomfortable.”

The Knights, who had four stolen bases, expanded a 2-1 lead with five runs in the sixth inning. Blas drove in two, while Evan Ianniciello and Chase Bodman had RBI singles.

“We were a little too intense at the start of the game,” said San Marcos coach Jeff Dufek. “I had to slow ’em down a little. We felt we could do some things on the bases.

“Finally, I thought, ‘You don’t know when or if you’ll ever get back here, so let’s let it hang out.’”

“That was all Jacob, scoring from second. I saw him coming and never stopped him, but he wanted to score.

“He has been our physical and emotional leader all year. He took over the game.”

Scripps Ranch had chances but couldn’t take advantage of six walks and a hit batter. Plus, the Falcons hit into a pair of line-drive double plays.

“We ran into a buzzsaw,” said Scripps Ranch coach Chris Lamb. “We had our best our best guy on the mound (Matt Rudick), a guy who hadn’t given up an earned run all year.

“Credit San Marcos. They got hot, and we couldn’t capitalize on our chances.”

This was the first title-game appearance for No. 2-seeded Scripps Ranch (20-12).

Both schools had prom Saturday evening and girls in formal dresses dotted the stands.