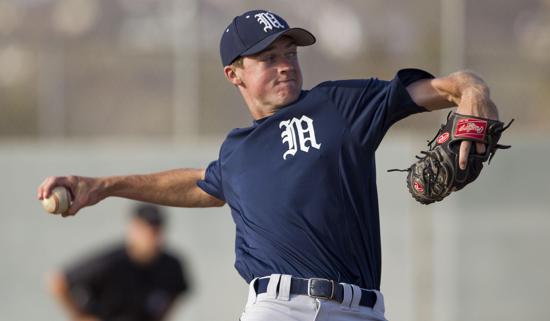 Outside of one at the top, the 2016 MLB Draft was a major disappointment for the region’s high school players.

After the Philadelphia Phillies took La Costa Canyon outfielder Mickey Moniak with the first pick of the draft, 375 players were chosen before the second San Diego prep player — pitcher Andrew Brown of Granite Hills — was taken.

One of the most talent-rich baseball areas in the country had four players drafted.

“Next year is San Diego’s year,” said a scout, who spoke on the condition he not be named. “It’s way early, but there were dozens of good juniors in San Diego this season. Those players will be seniors next season, and San Diego will be back on the map.”

Allen ran a blazing 6.69 seconds in the 70-yard dash at last week’s invitation-only showcase, put on by the local coaches’ association at Poway High. He showed a plus arm, good hands and outstanding range.

Batting leadoff for the Lancers, Allen hit .469 with five homers, 12 doubles and 32 steals.

“He’s the best player in the county,” a scout said.

Against Granite Hills late in the playoffs, Hurt threw a four-hitter with 11 strikeouts in a 3-1 Torrey Pines win.

“He’s the best pitcher we saw all season,” said Granite Hills coach James Davis. “He has an awful lot going for him.”

Granite Hills went on to win the Division I championship.

Allen and Hurt are the leading candidates from San Diego to be named to August’s Perfect Game All-American Classic at Petco Park. Both are committed to play for USC.

San Diego rarely has more than two players in that game. This season could be different.

Madison’s Kevin Abel could be that third player.

The Area Code Games in Long Beach are the week after the Perfect Game All-American Classic. San Diego generally has five to eight players on the Milwaukee Brewers team at the Area Codes. That number could go up this summer.

“Kevin Abel is a special player,” said Madison coach Robert Lovato. “He has a bright future.”

Eastlake has a pair of special players in shortstop Ben Ramirez and third baseman-pitcher Casey Schmitt.

A rangy left-hand hitter, Ramirez has good hands, a great arm and a plus bat.

Schmitt has a strong arm. They did him a disservice at the San Diego showcase having him throw from right field and shortstop, then starting on the mound in a game.

Still, his fastball sat at 89 mph.

Ramirez is committed to USC, Schmitt to San Diego State.

St. Augustine outfielder Nico Anderson was very impressive at the showcase as was Rancho Bernardo center fielder Tora Otsuka, the son of former Padres pitcher Akinori Otsuka. Both showed tremendous range in the outfield with plus arms.

He’s committed to USD as is Granite Hills utilityman Sean Ross, who was impressive.

“The 2017 draft should be a bonanza for the San Diego high schools,” a scout said. “This season was kind of embarrassing, but 2017 should more than make up for that.”

The following high school players, who will be seniors in 2017, are top prospects for next year’s MLB Draft (listed in alphabetical order):