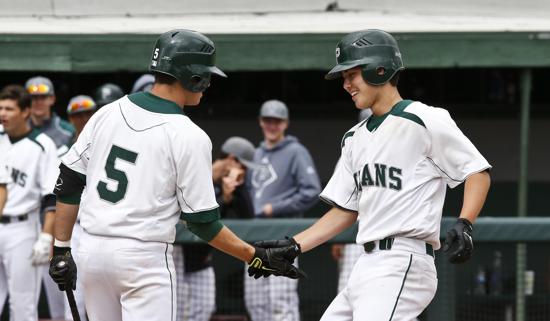 Kevin Bristow (right), known as “Danger” to his Poway teammates, batted .322 with 13 home runs and 98 RBIs during his four years on the Titans varsity.

Kevin Bristow entered Poway High four years ago as a slick-fielding shortstop known more for his defense than his bat.

As he prepares to leave the baseball program, the 6-foot-1, 200-pounder will take a career batting average of .322 with 13 home runs and 98 RBIs with him.

From shortstop, Bristow went to third base, played a little left field and wound up the last two seasons at first base for the Titans.

“It all went by so fast, just like a friend at Rancho Bernardo told me freshman year,” said Bristow, who plans to play at San Diego Mesa College. “It’s sad to see this all end.

“It was nerve-wracking being a freshman on varsity. I just wanted to play the best defense I could so I could stay on varsity. I wasn’t super confident in those days.

“I have friendships on this team that will last a lifetime, but I’m ready for whatever the next chapter holds for me.”

Along the way, Bristow helped Poway win the San Diego Section Division I championship in 2015 thanks to a late-season winning streak.

The Titans won 18 of their final 24 games, including a 10-6 win over Eastlake in the championship game at USD.

Bristow went 2-for-4 with four RBIs that night.

“Junior year was my best year ever,” said Bristow, who hit .324 with five homers and 36 RBIs that season. “Sophomore year was such a struggle. I didn’t live up to my potential at all.

“I think junior year I showed the coaches what I could do.”

And so did the Titans on their way to a title.

“I wasn’t expecting that,” said Bristow, known as “Danger” to his teammates. “Early on, we were trying too hard. Nothing was clicking.

“When we found our groove, we had the mentality that we’re better than you are every day. No way the other team was good enough to beat us.

“I feel like I did my part to contribute to that title and building the Poway legend.”

Missing out on winning another banner in 2016 still hurts Bristow.

“We had a lot of returners and it looked for a while like we could do this again,” he said. “But it all came crashing down in the playoffs in about 15 seconds.

“A lot of weird things happened to us in games this year, but at least we won our three-game series against Rancho Bernardo.

“That’s a little bittersweet without a CIF to go with it.”

Asked about his longest home run at Poway, Bristow noted that his best shots came on the road.

“The one I hit this year at Vista was a bomb,” he said. “I thought it was going to hit the scoreboard in left. I didn’t see where it hit.”

Bob Parry, coaching at third base for the Titans, did see it land.

“He’s the best defensive first baseman ever at Poway. He can carry a team with his bat for a few weeks at a time.

“You give me nine guys like Kevin and I’ll win CIF every year.”

That’s quite a statement about a guy who started at Poway strictly as a glove man.