Per-game number yet to be established for 2017 prep season 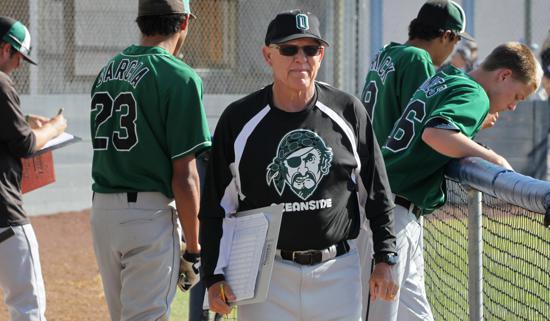 Oceanside coach Dave Barrett isn’t a fan of pitch counts because he says “one size” doesn’t fit all.

Pitch counts, which have become a topic of conversation from Little League to Major League Baseball, will be a point of emphasis next season at the high school level.

Prep sports’ national governing body has passed a rule limiting the number of pitches a pitcher can throw in a game. What that limit will be is up to individual states and sections, which also may have additional rules that limit a pitcher’s innings and appearances.

“The reason we’re looking at this is because of past abuses,” said Dave Barrett, baseball coach and athletic director at Oceanside High.

“Some kids can’t get to 100 pitches while others are OK at 125. The opponent, the temperature, the game itself come into play.

“We have a rule at our school that for every pitch you throw in a game, you must rest for one hour. So a guy with 35 pitches in a game sits out 35 hours before he can pitch again.

“We’ll keep the innings limit at 10 and probably the appearances at three,” Barrett said. “But I’m not totally on board with pitch counts because I don’t think one size fits all.”

A major case of abuse was recorded in Kansas this season where a pitcher threw 157 pitches over 10 innings in a playoff game. Both the pitcher and his coach were suspended.

A 2015 study by the American Orthopedic Society for Sports Medicine found that 56.7 percent of Tommy John elbow ligament replacement surgeries were performed on players 15 to 19 years old. That study was conducted between 2007 and 2011.

Despite uncertainty about the pitch-limit number, the new rule will be in place for the 2017 season.

“If 12-year-old Little Leaguers have an 85-pitch limit, high school has to be more,” Mitchell said. “Honestly, coaches in San Diego get it. Our coaches association is awesome.

“No one wants to burn out a player. I’m a big proponent of saving arms, so I agree with this in theory.”

In Little League, there is a designated scorekeeper who charts the number of pitches. That won’t happen in high school, where both teams keep scorebooks.

“My scorekeeper has been with me 20 years, and he’s fantastic,” Mitchell said. “Not everyone has that luxury.

“Lincoln has a young staff. Their coach was coaching third and keeping the scorebook at the same time. Can he be expected to keep a 100 percent accurate pitch count on his team and mine?”

Barrett suggested each team keep a pitch count, then double check with the umpires between innings.

Mitchell feels that will lengthen games and put more pressure on the umpires.

“That might hurt a team without pitching depth, teams that tend to stretch guys out. We’ve had opponents throw 130, 140 pitches against us.

“This is all about the safety of the kids.

“The number of Tommy John surgeries is outrageous.”

“My concern, though, is that we’re trying to legislate common sense,” Barrett said.

A new national rule limiting pitches goes into effect next season, but limits for the San Diego Section have not been established yet. The area could align with Little League rules: