Even kickers stay busy during summer

Often by themselves, these specialists work to improve in offseason 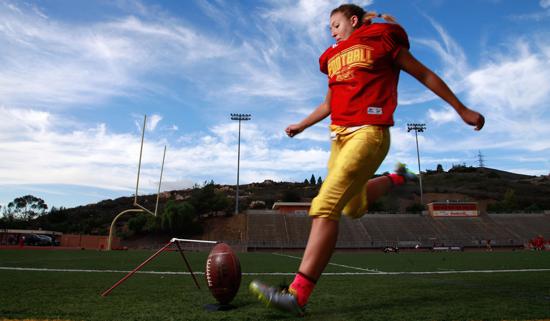 Mt. Carmel's Ashlin Morey is working on her kicking mechanics this summer.

For high school football players, summer is no time for vacation.

After months of hitting the weight room following the end of the season, football teams break into different groups during the final weeks before the start of fall practice.

Passing leagues allow skill players to return to the field. Returning lettermen can hone their skills. Newcomers get an early taste of what playing on the varsity will be like.

At the same time, the linemen keep lifting weights.

What about place-kickers and punters?

Kickers don’t fit into any of those areas unless they also play a position. These days, most kickers are specialists.

Most coaches insist kickers show up for early-morning summer workouts, more to feel like they’re part of the team.

Some kickers then head off to practice with their soccer club teams. Others work with personal kicking coaches.

“No one understands pitchers, goalies and kickers,” said Rancho Bernardo coach Tristan McCoy, whose team won a state bowl championship last season. “I remember (former RB kicker) Nate Tandberg sneaking off to Taco Bell and coming back with a couple of burritos while the rest of us were still stretching.”

Out of sight is normal for kickers, who spend most practices during the season working by themselves at the other end of the field or on a different field.

Carlsbad senior Seth Ketterer is your typical place-kicker, taking part in morning workouts, including drills with the Lancers’ wide receivers. Then he heads off to be with soccer teammates on the Albion club team.

“This is the fun time for me because I actually spend a lot more time with my teammates,” Ketterer said. “I’m constantly telling the linemen they really aren’t that strong.

“When I started going to the weight room sophomore year I got pushed around a bit. I was 5-feet-8 back then. I’m 6-2 and a senior, so I’ve gotten a little respect.”

Ketterer is working on gaining more consistency with his mechanics, especially with his left, or plant, foot.

“Sometimes I’ll dry kick while the coach films it so I can see what I’m doing,” he said.

Rancho Bernardo kicker Matt Araiza, considered one of the best in the country, has set his sights on gaining more strength as he heads into his junior season.

Araiza did not begin playing football until last year. Soccer was his game. He’d never been in a weight room before then.

“I couldn’t even lift with the receivers back then,” he said. “This year I’m lifting with the linebackers.”

A challenging moment for the 6-1 kicker last year came against Carlsbad. After hitting on his first seven field goal tries, he missed a 46-yarder. He also dealt with kicking in cooler weather during the playoffs.

“I didn’t talk the whole way home after that Carlsbad game,” Araiza said. “I have a new-found respect for kickers in cold weather. Just kicking the ball hurt, that’s how cold it was.”

Besides trying to get better, the 5-4 senior has to keep up with the boys.

“It took a year for them to realize the girl is not leaving,” Morey said. “Finally, they stopped treating me like a girl who was trying to impress the boys.”

Morey, whose best kick is a 48-yarder, is currently working on adjusting her mechanics from the sidewinder motion of a soccer player to a football kicker with more of a straight-on approach.

While kickers may be out of sight most of the time during the summer, they’re plying their craft just like everyone else.