New facility should be opening by 2018; no more walks across street to Southwestern College 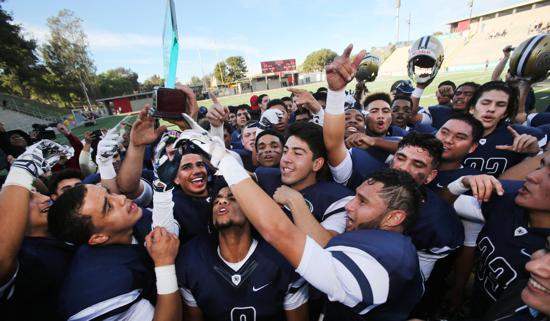 The Bonita Vista football team hopes to be celebrating on its own campus in 2018.

CHULA VISTA — Quick quiz: Name the only high school in the Metro Conference that doesn’t play its home football games on campus?

The Barons haven’t had a real home game since the school started offering varsity football in 1967 — a year after opening its doors. Instead, Bonita Vista had what was long considered the best of all worlds by being able to use the first-class facilities at Southwestern College, which is right across the street.

All that will change soon, probably by 2018.

That’s the projected timeline for Bonita Vista to have its own stadium with all the bells and whistles of other schools in the district. An all-weather turf field inside an all-weather track with snack bars, restrooms, aluminum bleachers on both sides of the field and press box.

“The plans and financing have been approved,” said Metro Conference District Athletics Coordinator Joe Heinz. “Bonita Vista is a little different from other district schools in that we really aren’t starting from the ground up, but we’ll have to get the environmental impact reports before we can start.”

Another Metro Conference school, Hilltop, is expected to have its new stadium opening in 2017 because it’ll simply be an upgrade of existing facilities, which already includes lights.

Not so at Bonita Vista whose on-campus football field has virtually no seating, a grass field and a dirt track that is considered so inferior the Barons do not host a single track meet. With an all-weather field, sports like soccer, field hockey and lacrosse will be able to use the facilities along with football. Even at night because there will be lights.

“Not having lights is a real issue, especially in the fall after daylight savings time,” said head football coach Chris Thompson. “We’re all off-campus coaches and by the time we get to practice, there isn’t much daylight left.

“Southwestern College has been great but it’s not the same walking across the street to play as it will be going straight from our locker room to the field. It’s ‘Friday Night Lights’ for the players, the fans and the administration. Everyone is excited about it.”

Dimaggio Cazares was the quarterback of last fall’s Bonita Vista freshman team, and he figures to be a senior when the Barons finally have their own stadium.

“I feel good about that,” said Cazares. “The surrounding schools all have better facilities and the game is much faster on all-weather turf. Our grass (where the freshman team plays) is real thick.

“It will be so much of a better to go straight from the locker room to the field. It’s just a better atmosphere.”

Playing at Southwestern College did have one advantage.

“When the varsity played for the (section) championship (at Southwestern College) last year, the team did feel more comfortable,” Cazares said. “The players can get nervous if they’re playing in front of a big crowd in a big stadium for the first time, but not our guys. We could focus on just playing a better opponent.”

The stadium plans that were approved in 2012-13 will be used along with those from stadiums like Mission Bay in the City Conference which opened last fall.

“We want to do it right the first time,” Heinz said. “The district is committed to bringing all of the schools’ athletic facilities up to the rest of the county.”

Once Hilltop and Bonita Vista are finished, it is expected football fields at Mar Vista, Southwest, Castle Park and Chula Vista will be addressed. Those four fields are among the last in the county which still offer grass instead of all-weather turf.