QB has Fresno State in his future 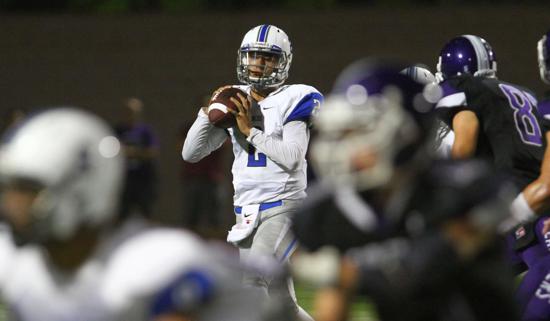 Mark Salazar threw for 2,248 yards and 21 TDs in helping the Broncos to a state title last season.

Some high school football players enjoy piling up the scholarship offers before making a decision on their next destination. Mark Salazar might have done the same, but he was lucky enough to find the perfect fit right away.

The Rancho Bernardo High senior quarterback committed to Fresno State University last month. The Bulldogs, who play in the Mountain West conference, are the only program to offer Salazar a scholarship thus far, but more offers are likely to come before February’s official signing day.

“I honestly saw myself waiting until February to pick a school, but I just felt this was the right thing to do,” said the 6-foot-3, 185-pound Salazar, who helped lead the Broncos to their first state championship last year. “I wasn’t worried about piling up a bunch of offers. I was just worried about getting the right fit for me.”

Fresno State ended up being the right fit for multiple reasons, said Salazar. He pointed to the straight-forwardness of the coaching staff, the pro-style offense and the fact he will have an opportunity to earn a roster spot his freshman year.

“Fresno State gives me a chance to play in a system I am comfortable in and used to,” Salazar said. “It is very similar to what we run here at Rancho Bernardo. And the coaches are great and they tell you the truth whether you like it or not. They will play the best guy whether he is a freshman or senior.”

It also doesn’t hurt that Fresno State is only about a six-hour trip from San Diego. Salazar’s family will be close enough to attend home games.

The Bulldogs have been pretty wide open at the quarterback position since Derek Carr was drafted by the Oakland Raiders in 2014. Salazar is hoping to turn in a stellar senior year at Rancho Bernardo and then go straight to Fresno State to compete for a spot on the roster.

“That is the goal,” he said. “I definitely want to go in there and compete, win the job and play early. They are definitely going to give me a chance.”

The Broncos are coming off their best season in school history. Salazar knows the pressure is on to repeat last year’s success, which included a Palomar League title, Division II section championship, SoCal Regional crown and the state title.

It will certainly be tougher since Rancho Bernardo will play in Division I this year.

“It is going to be difficult to repeat last year,” Salazar said. “Only a few teams in the state have ever done it, but it is our goal to try.”

Salazar threw for 2,248 yards and 21 touchdowns with just eight interceptions in 2015. He rushed 35 times for 161 yards and four touchdowns. The passing and rushing yardage could balloon this season.

“We also have a backup quarterback this year. Last year we didn’t have one. So, I am going to have an opportunity to show my athleticism. I am rated as a pocket passer, but I want to show I can run it.”

Salazar’s first chance to do that will be Aug. 26, when the Broncos travel to Eastlake for the opening game of the season.