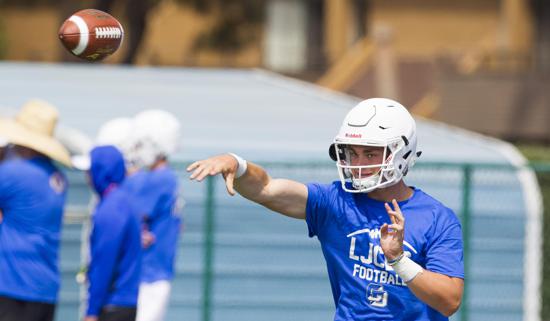 The quest to become a quarterback has been anything but smooth for Braxton Burmeister.

There is more to the assignment than simply learning the X’s and O’s.

Quarterbacks also must lead, essentially becoming an assistant coach on the field.

Some signal-callers shrink from that responsibility as they reach higher levels of competition.

Yet the prospect looked quite daunting before he reached high school at La Jolla Country Day.

“Leadership comes with the job,” said the 6-foot-1, 210-pound senior, who has committed to Arizona. “It can be scary, though. I used to throw up on the way to my football games until about sixth grade.

“I would just tell mom (Angela) it was time and she’d pull the car over. I’d open the door and throw up every time.”

In seventh grade, Burmeister learned to calm his nerves while watching older brother Sage play football — he was a slotback — and basketball for the Torreys.

Though he’s playing at a smaller school, Burmeister has slowly emerged as one of the county’s best all-time quarterbacks.

He is closing in on a number of San Diego Section career records. With 7,051 passing yards in three seasons, Burmeister is now No. 7, just 2,028 yards behind leader Anthony Lawrence of Grossmont (9,079).

Burmeister is also No. 4 in pass completions (541) and career touchdown passes (74). Lawrence leads both categories with 691 and 96, respectively.

“I saw him in third grade when he was beating up all the fourth-graders on the field,” said LJCD coach Tyler Hales. “He makes the magic happen. That’s why we’ll ride Braxton this whole season.

“He could play quarterback at bigger schools like Oceanside and Helix. He’s not afraid of the competition because he doesn’t see himself as a small-school kid.

“A couple of college coaches have told me he’s the best quarterback in the state.”

Burmeister has been a model of consistency with the Torreys, completing 58.4 percent of his passes as a freshman, 55.2 percent as a sophomore and 57.9 percent in 2015 when he passed for 2,771 yards and 31 touchdowns.

He also rushed for another 868 yards and 20 TDs while cutting down his interceptions from 13 in 2014 to just seven as a junior.

“I want to play at the highest level, win games, win the state title,” Burmeister said. “I’d love to go out with a big bang.”

Burmeister plans to graduate from La Jolla Country Day after the first semester and begin his college experience at Arizona in the spring.

His desire is to play as a freshman, but if the Wildcats redshirt him he’ll start working on being ready for his shot in 2018.

The last thing he plans to do is shrink from the enormous demands of playing in the Pac-12 Conference after leading La Jolla Country Day, with an enrollment of around 1,200 students.

When he leaves, though, it will mark the end of an era. For the last eight football seasons, there has been a Burmeister on the LJCD varsity.

“It will be really weird with no Burmeisters left,” Braxton said.

Dreams of winning a San Diego Section title fell short last fall as the Torreys were beaten 17-9 in the semifinals by eventual Division V champion Coronado.

This year, with LJCD competing in Division IV, Burmeister has one shot left at claiming a second crown to go with the title from 2014.

“I used to throw the ball around the front yard with my brother and I knew I wanted to be a quarterback,” Burmeister said. “I love being in charge, making all the calls, reading the defense, switching the plays.

“I love having the ball in my hands.”

The Torreys love having the ball in Burmeister’s hands as well.

Practice: Some high school teams in the region have begun workouts. Others are about to start. A maximum 28 practices are allowed before the first game.