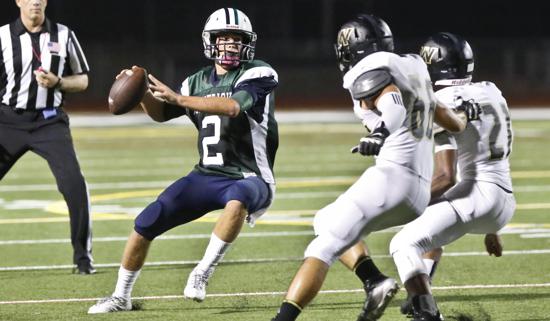 Players to watch: Isaiah Ramos, the PG on the basketball team, takes over at QB. He played in several games last season, throwing three TD passes. Jeremy Cooper is a tall WR with a good reach. WR Jake Keller is getting looks from Ivy League schools. Chandler Patterson returns at LT and anchors the OL.

At a glance: The Lancers threw for 1,981 yards and rushed for 2,150 last season. MacNeal would like that same balance. Jesse Atiga, who also plays DT, takes over at RB and the coaches expect big things out of TE Cameron Thomas, who was a first-team all-league pick on defense with 49 tackles and seven sacks. DE Tarek Carnes had 22 tackles. LB Alex Pieretti is drawing interest from Ivy League schools while LB Jason Siaosi had 15 tackles. The JV team went 8-2 last season, so there are good players who know how to win coming up.

Players to watch: The big men in the backfield — QB Jaden Casey and RB Chris Brown — return. Starters as sophomores, Casey completed 83 of 167 passes for 1,382 yards and nine TDs. Brown rushed 120 times for 882 yards and seven TDs. He’s also a force on defense with 61 tackles from his LB position.

At a glance: The Wildcats made it to the San Diego Section Division I title game last season, losing a hard-fought contest to crosstown rival Oceanside. Casey will run a four-receiver offense that includes WR Manny Kariuki, who had 15 catches. The guards and tackles average 298 pounds and C Joseph Carvajal checks in at 225. The defense, led by Brown, should be rock solid. DE Malu Malotumau had 56 tackles, LB Josten Ignacio had 21 and S Jagger Knapp 23. Big DT Eddie Laie and LB Rocky Katoanga are coming off injuries.

Players to watch: QB Tanner Clark has started every game the last two seasons, accounting for 1,703 yards running and passing and 18 TDs in 2015. He may also see time at WR with JV QB Jake Neufeld ready for varsity action. WR-RB Zach Goodkin had 1,107 all-purpose yards.

At a glance: Offensively, this team has home-run potential with big-play guys at QB, RB and WR. Clark and Goodkin are the sparks, but FB Victor Epstein has a year’s starting experience as does WR Jake Cashman. Speedy Brett Pueschel is slated to be the TB. LB Taj Sherman is the heartbeat of the defense, tough, strong and vocal. Along with Nicholas Madgett and Nick Demos, the Mavs are strong at LB. Alec Varteressian anchors the DL. Harper Engemann is the best of an experienced secondary that includes CBs Reed Goddard and Lucas Spencer and SS Mark Roberts. The JV and freshmen teams were both 10-0 last year.

Players to watch: Junior QB Jack Tuttle is the only starter back from an 11-1 team. He completed 130 of 200 passes for 1,862 yards and 15 touchdowns with just five interceptions. And he rushed for 250 yards and three TDs.

At a glance: With only one starter back and a tough schedule, Hauser will have to work some magic. Christian Esqueda and Sam Cooke saw considerable time, so Tuttle has a couple of good targets. Natano Lologo and Sam Dixon figure to be the main RBs, but Lologo only had 15 carries and Dixon moves over from the defense. The offensive line is big, but unproven. On defense, LBs Jared Leapart, Sam Epenesa and Bryan Barraza are a strong unit. Eric Torres takes over the place-kicking.

Players to watch: Max Shuffer moved among QB, TE and DE last year. He’ll be the QB this season, but is the team’s best DE. Jake Gerardi had a great summer. He’s a TE, DE and PK. WR-DB Azizi Hearn emerged over the summer and has turned into a big-time college recruit.

At a glance: There are 15 starters back from a team that rallied and won the San Diego Section Division I title. Shuffer, Hearn and Gerardi are keys to an explosive offense. The OL, boasting returning starters Mykel Bernal and Donovan Laie, averages 282 pounds. Tevin Meadows steps in as the No. 1 RB. Josh Garcia is a versatile slot. On defense, LBs Tanner Schaul had 51 tackles last season and Mikah Linnan had 25. Julian Hicks is a top-notch DB. Gerardi averaged 33.4 yards on 43 punts and had 23 PATs and six FGs.

Players to watch: TE-WR Michael Gadinis has offers from Ivy League schools. Yujay Kurosu anchors the line on both sides of the ball.

At a glance: Sophomore Miles Hastings takes over at QB. He’s young and athletic, but untested. Jacob Schneider, a TE-DE, will be a force on both sides of the ball and should get several college looks. Jacob Raab, a DT and C, also is a two-way player. Michael Perrone is a big OT, who has the ability to be dominant. LB Louis Bickett has the size and ability to be a top-flight player. The Falcons suffered through a five-game losing streak in the middle of last season, but bounced back to make the playoffs and advance to the Division I quarterfinals. They hope to capitalize on that momentum.