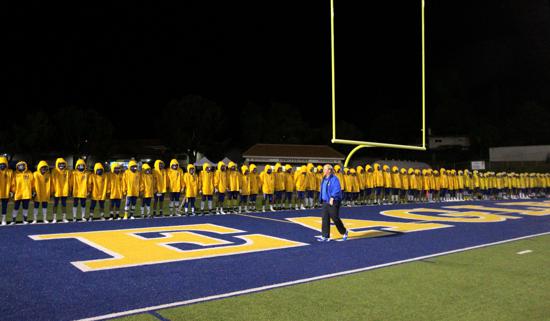 San Pasqual lines up according to the Eagles' pregame custom.

Player to watch: As a junior, QB Kellen McCoy was a part-time starter, passing for 274 yards and one TD while also catching 12 passes for 85 yards. He is now the full-time starter. McCoy was a second-team all-section infielder on the baseball team.

At a glance: The Cougars struggled on offense last season, rushing for just 13 touchdowns while passing for another nine. Only four starters — RB Marcio Souffront, WR Miguel Rocha, G Zeke Rodriguez and C Alex Gonzalez — are back from that unit which scored just 162 points. Defense will be a strength. Six starters are back in hopes of allowing fewer than nearly four touchdowns a game. FS Jesus Barajas is the lone returning starter in the secondary while David Parks, Johnathan Middleton and Quinton Gaudet all return at linebacker. DT Josh Middleton and NG Jose Martinez anchor the front four. CB Edwin Vorachack has returned from an Achilles’ injury.

Player to watch: With any new coach comes a new system, and how quickly QB Jack Grantham masters it will determine just how effective the offense will be this season.

At a glance: There is a bit more size in the offensive line as well as a bit more depth with seven players rotating in there. Linemen Chase Crosswhite (6-5, 250), Blake McGinley (6-4, 245), Jesus Santana (6-3, 230) and Mikell Jackson (5-11, 270) will lead the way on the ground for TB Shon Hagan. Grantham will have lots of targets in WRs Kobe Stallings and Christian Arce and TEs Charlie Bickell and John Brodak, who will make an impact at defensive end. Hagan was the team’s MVP in 2015 at cornerback. Burt plans to employ five defensive backs most of the time with Stallings, Bickell and Ethan Martin handling the duties at safety. Burt, 74, began his coaching career in 1966 in the Los Angeles area.

Player to watch: In 2015, the Longhorns surrendered 30 points a game en route to a 1-9 season, so the defense is the place to start. Meyer is looking for CB Antonio Bowman to help solidify the secondary. Bowman was cleared in July after spraining an ankle during track season.

At a glance: The offense averaged just 13.9 points a game last year. QB Ace Roach, a transfer from Carlsbad in 2015, has taken over signal calling, allowing Meyer to move Josh English from quarterback to wide receiver after he suffered two broken collarbones. RB Anthony Bowman will be the focal point of the offense, especially early until the passing attack matures a bit. The Longhorns could use the I-formation to make that happen. Only G Anthony Escalante and place-kicker Nic Fletes are back this season on offense. Along with Antonio Bowman, ILB Braxton Ransaw must play a key role this year along with FS Ian Carey.

Players to watch: The key to this season is the entire offensive line. To say the blocking was a weakness in 2015 would be an understatement. Only four times did the Eagles score at least two touchdowns in a game. C John DelMastro and RG Marco Grimaldo are the only returners up front as the line tries to get back to being The Hogs.

At a glance: Only eight starters are back, but the hope is the newcomers will be more productive. The emergence of QB Westin Erdman in last year’s playoff loss to Westview provides a bright spot for the Eagles, who tied Fallbrook and Valley Center for the Valley League title after starting the season 1-4. Erdman keyed the run to the JV league title with a 7-3 record. “He’s more like San Pasqual quarterbacks of the past,” Corley said. “We need to get that identity back on offense.” Corley feels DT Cole Hardan is a college prospect and so is ILB Jake Salaheddine. ILB Tim Hansen is solid as well.

Player to watch: Brock Moffitt will make most of his plays at linebacker again this season, but the first-team All-Valley League pick will also play H-back and, according to Gilster, could play quarterback in a pinch.

At a glance: While the varsity was 8-4 last year, the younger Jags were 7-3 on JV and 9-1 at the frosh level. There are plenty of capable newcomers around, including QB K.J. Mazzetti, who led the freshman team. He takes over for Rhett Reilly. Offensive tackles Edward Hill, up from the freshman team, and Ulysses Zuniga, who played JV last year, are 275 and 285 pounds, respectively. Good thing because there are no returning starters among the offensive skill players. The front seven on defense will be imposing, led by Moffitt and DE Micah Wierenga, who is coming off hip surgery after being first-team all-league his first two years at Valley Center. In the secondary, two starters are up from the JV and CB Nick Serrano did not play in 2015.