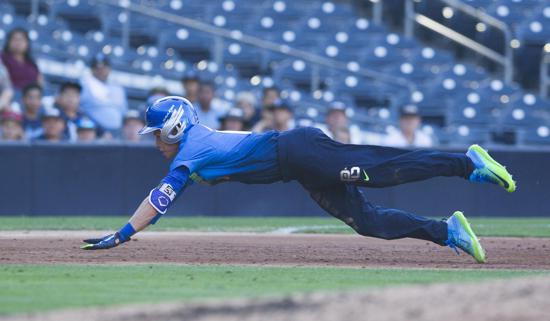 Francis Parker's Nick Allen, who excelled on defense at shortstop, slides into third base during the Perfect Game All-American Classic at Petco Park on Sunday.

It was the first time in the event’s 14-year history that a team scored in double figures. It also marked the largest margin of victory, surpassing the West’s 7-0 win in 2014.

The West leads the series 8-6.

Allen, who plays shortstop at Francis Parker School, was brilliant defensively in Long Beach and made two outstanding plays in the first inning Sunday.

On the second batter of the game, Allen roamed far to his right, dove, fielded the ball, and threw out Adam Hall at first base.

A batter later, with runners on first and third, Allen took a throw on the run from catcher M.J. Melendez, twisted, and fired back home to nail Quentin Holmes at the plate.

Allen also singled home a run in the West’s five-run second inning, walked in the fourth, and singled and scored in the sixth.

He reached base twice in the Under Armour All-American Classic in Chicago with a walk and a hit by pitch in a game that was called after seven innings because of rain and lightning.

“I’ve played in Petco Park a couple of times with my high school team. Playing here gives me chills,” Allen said. “Defense is what I’m known for.

“That first ball stayed down when I dove. Once I gloved it, I tried to throw a laser to first.

“Being only 5-foot-9, people say I might not be a shortstop down the road. But I love playing there. I want to play it as long as a I can.”

Hurt, a right-hander from Torrey Pines, threw three scoreless innings with five strikeouts at the Area Code Games. He pitched a scoreless third inning Sunday, touching 94 mph with his fastball, with a strikeout.

“This was so much fun,” Hurt said. “I was a little scared and was all over the place in the bullpen. Once I got into the game, though, I was able to focus and throw strikes. This was really huge for me.”

Mitchell, an outfielder from Rancho Bernardo, singled and scored a run in the third. He also hit 10 balls into the seats in the Home Run Derby, finishing second to Hunter Greene.

Ramirez, normally a left-side infielder, started at second base. He went hitless in two at-bats.

Greene, whom some scouts tout as the potential first pick in the amateur draft next year, was brilliant in Long Beach and equally impressive Sunday.

Starting on the mound for the West, he allowed a hit and a walk in his only inning, but his fastball touched 97 mph. He also won the Home Run Derby with 16 homers, five of them coming on five swings in the finals to beat Mitchell.

The Perfect Game All-American Classic is the culmination of a busy summer for most of the players, with stops in Florida, North Carolina, Georgia, Illinois, Long Beach and San Diego.

For Allen and Mitchell, however, there is one more stop, or maybe two.

They made the USA Baseball 18U National Team cut from 108 to 40 players.

They head back to Houston in mid-September. After a round of workouts, the team will be cut to 20. Those 20 will represent Team USA in the COPABE Pan Am AAA Championships in Monterrey, Mexico, Sept. 23-Oct. 2.

“It’s going to be tough to make the final 20, but I’m going to give it everything I have.”