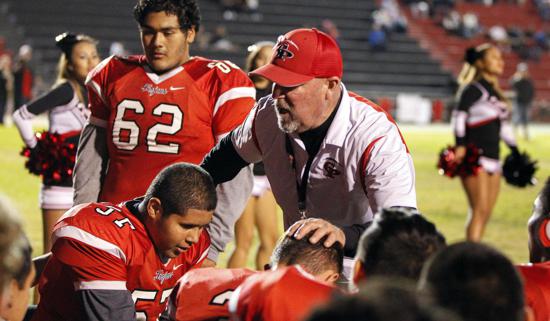 Scouting report: The defending league champions graduated 28 seniors — a huge blow that means veteran coach Graham will need to work a little magic. There is no shortage of potential running backs as Arana, Navarro and Richmond carried the ball in 2015. Smith, a sophomore, is one of the top newcomers. Chavez (6-0, 240) and Tolbert (6-0, 250) are solid linemen, but Graham will have to find some help there.

Scouting report: With just three returning starters, a first-year head coach and a 2-8 record last year, it would seem the Aztecs are hurting. Not really. There seems to be strength in the skills positions with Bugarin and Parra leading the way and the line has some size with King (6-3, 270), Castro (6-3, 240) and Hernandez (6-4, 300) big enough to match up with anyone in this league. How quickly the team meshes under Subbiah will be the key.

Scouting report: Guardado, Bonneau and Martinez give the Cougars experience in the backfield and Michigan transfer Daishawn Lee could be the surprise of the season. Though just six starters return, only 12 seniors graduated and now the returnees have had a year under Hatchett. Gutierrez (6-2, 200) has great size at linebacker and keys a team with four regulars at 200 pounds or better. After being outscored 338-23 in first seven games, SY lost a pair of close ones by a total of 11 points.

Scouting report: Silva starts his second season with a ton of optimism fueled by the return of 13 starters, seven of whom earned some postseason recognition last year. Though Hoar is the top returnee at running back, there are four others pushing him. Up front, Saldana and Aguayo have good size with several other 200-pound-plus players ready to roll. It is hoped four transfers will make an immediate impact.