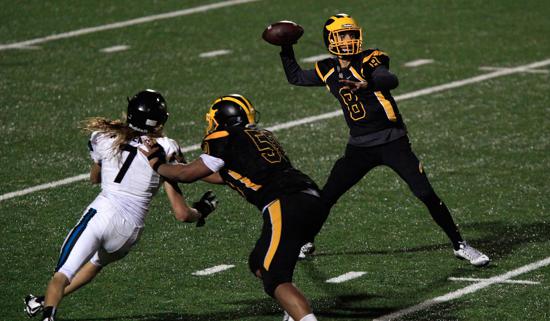 Scouting report: Goodwin, the reigning San Diego Section 100-meter champion, is a dangerous threat at wide receiver. He totaled 711 yards in receptions last season, scored seven TDs and has been offered a scholarship by Nevada. Junior Brad Jeremiah (6-4, 200) takes over at QB for his graduated brother, David. Morones and Contreras are third-year starters on defense.

Scouting report: David Dunn thinks Edwards ranks with Mater Dei’s CJ Verdell and Madison’s Erick Buchanan among the best backs in the section. Brown, McCorley and Daelyn Dunn lead what figures to be a stingy defense. Former Michigan QB Tate Forcier is coordinating the passing game. There’s a load of skill-position talent, but will the linemen deliver?

Scouting report: The 6-3, 280-pound Jackson, a terror on defense, is being recruited by Oregon. Former La Jolla head coach Jason Carter brings the no-huddle to Mission Bay. Look for Correa, a junior, to fill the air with passes. In Jenkins, Holiday and Hicks, there’s no shortage of athletic targets.

Scouting report: The Tigers operate out of the single wing, and they’re explosive. Turner accounted for nearly 3,000 yards from scrimmage while Irby tacked on another 1,100. McNair thinks the Tigers can score 30 points a game.

Scouting report: The Falcons run a spread attack, and Engle is expecting big things out of Mullin, a 6-5 senior with excellent accuracy. Norberg, who has committed to play baseball at Miami (Ohio), will be the go-to receiver. Batts is a slasher at RB. The question mark is an unproven defense. Williams is a talented hybrid S-LB.