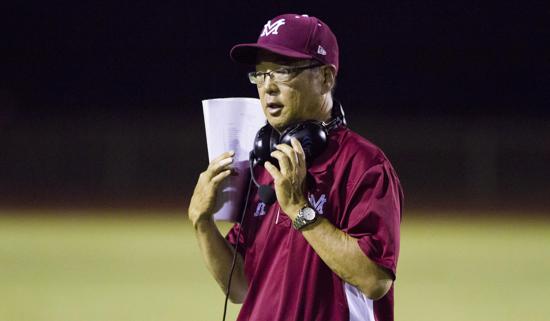 Monte Vista coach Ron Hamamoto is working with just 28 players on the varsity, but the coach likes their work ethic.

Scouting report: Pisiona guided the Braves to their best record in 10 years last fall. They will miss dynamic RB Nathan McCullough (1,552 yards) but hope to get good production from Garner and Michel in a double-tight offense that relies heavily on the run. Smith, who split time at QB last year with his brother Charles, rushed for 522 yards and six TDs, but he is the only returning scorer. Led by Lauifi (112 tackles), the linebacker corps is a strength. This will be the second year ECV is not fielding a JV, so Pisiona predicted, “It’ll take us a couple Friday nights to get our feet wet.”

Scouting report: After going undefeated in league last year, the Eagles were upset by Otay Ranch in the Division II quarterfinals. Juniors Curran (SDSU, Pac-12s), Gonzalez and Burton are attracting college scouts. Curran (6-5, 255) also plays basketball. Gonzalez takes over primary running duties from Thomas Youmog (1,200 yards, 15 TDs). Burton’s brother Jacob is at Arizona, and many feel little bro’ is better. Siegfried, a junior who threw for 761 yards and six TDs, and sophomore Ostreng are battling at QB and may be rotated. The Sanders twins (both 6-1, 300ish), join Curran and Samaniego as returning starters at OL. Strickland is a four-year starter.

Scouting report: With no JV team last year, the Monarchs have only 28 players on varsity, and several players will need to play both ways. There are 16 experienced seniors, and Hamamoto is encouraged by their work ethic and camaraderie. With Dennis Dahlin transferring to Valhalla, Pitoau will be a first-year starter at quarterback in a modified wing-T offense. An otherwise smallish team, Stevens (6-3, 300) should clear some holes for Willis-Brown and Jamez McClendon — a pair of 160-pound backs with quickness.

Scouting report: A switch in leagues should benefit the Matadors, but their nonleague schedule is tough with Poway, Valhalla and Madison. Hanson is a force at MLB on a solid and fast defense. Valadez threw for nearly 1,700 yards and 14 TDs as a junior. Greene, expected to be the primary ball carrier, has speed outside and power inside. Coker, a talented receiver and safety, and Beas are three-year starters. Coker, Moore and Yarbrough were the only non-seniors to score TDs last year.

Scouting report: Six three-year starters — Forster, Wallace, Rasmusson, Brown, Gulihur and Vargo — highlight an improving team that lost to University City in the Division IV quarterfinals and lost three games by six points or fewer. Oedewaldt, a junior, takes over at QB for Frankie Gutierrez (2,342 passing yards, 22 TDs) and should have protection as four starting offensive linemen return from a squad that averaged 36.8 points per game. Wallace, a hard runner with great speed, rushed for 1,226 yards and 13 TDs. Dehoyos (96 tackles, six sacks) and Henselmeier (77-10) are standouts on defense.