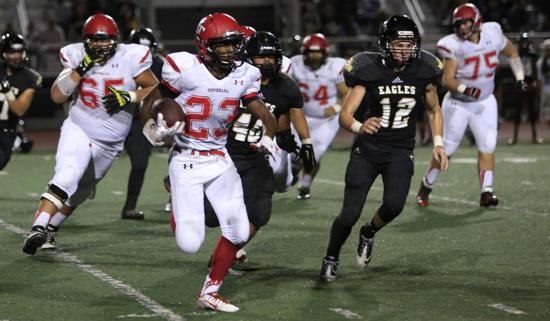 Scouting report: After reaching the semifinals two of the previous three seasons, the Wildcats were bumped in the first round by Otay Ranch last year. Zeleny, the leading tackler on a good defense, Gutierrez (336 yards, eight TDs), Mickle (532 yards, three TDs) and Grijalva are the primary carriers in a run-oriented offense that is loaded with experience on the line. Brawley averaged 26.5 points per game but threw only one TD pass last year. Klien (6-3) is an athletic sophomore at WR. Christian, Valley Center and Yuma Cibola provide tough nonleague tests.

Scouting report: Tyree, 75, once coached Imperial to a Southern Section title — in 1973. In 38 years at 10 different schools, he is 204-171-4. He is also the Bulldogs’ fourth head coach in as many seasons, and he inherits a winless team that was outscored 411-140. Still, Tyree is optimistic about making the D-V playoffs. Moreno returns to lead a triple-option offense with good backs in Beltran and Rivera, a college recruit on defense. Castillo is a three-year starter. Bustos is joining the Marine Corps. Tyree calls Rodriguez, a freshman center-nose guard, the toughest guy on the team.

Scouting report: The Spartans made the Division IV semifinals two years in a row before falling in the first round last year to Santana. Central had only four TD passes, but Guzman has more experience now and new offensive coordinator Josh Rivera is installing a veer, short pistol offense that will emphasize more passing. Velasquez, a three-year starter, and Mark Garcia (6-4, 275) anchor an experienced offensive line that will block for the talented trio of Ramirez (807 yards, six TDs), Guzman (417 yards, five TDs) and Gutierrez. The JV was 15-3-1 and won league the last two years.

Scouting report: The Tigers started 0-5 last year against a tough nonleague schedule, then won seven in a row and the league title before losing to Bonita Vista in the Division III semifinals. They scored an impressive 409 points but yielded 407. Savage is a beast at LB (66 tackles, 4.5 sacks) and RB, where he had 1,045 combined rushing-receiving yards and 16 TDs. Hueso had 1,446 rushing yards and 13 TDs. Beamon had 61 catches for 790 yards and nine TDs. Rodriguez, a sophomore, and Davala, a junior, are battling at QB to take over for Aaron Bonillas, who threw for 4,840 yards and 47 TDs the past two seasons. Gutierrez (80 tackles, 5.5 sacks) and McDonald (70 tackles, five sacks) also lead the defense.

Scouting report: The Yellowjackets missed the playoffs the past two years, but Dagnino is excited about a core group of seniors and 15 promising sophomores. Rivera (6-0, 167) is switching from RB to QB, and he’s a three-year starter at LB. His primary targets in the spread offense should be Krisell, Daniels and Hill. Callaghan provides some balance in the backfield. Cox, the principal’s son, is the only returning lineman. PV made the semifinals in 2013 but is only 2-18 in league the past four seasons.

Scouting report: After four straight losing seasons, the Eagles soared last year with a host of sophomores and juniors and made the Division IV quarterfinals, averaging 30 points per game. The top-three rushers were all sophomores — Saikhon (1,201 yards, nine TDs), Cordova (1,162 yards, 14 TDs) and Jungers (490 yards, eight TDs). Jungers also threw for 980 yards and 11 TDs. The offensive line features Vizcarra, a three-year starter, along with Holguin and Puga, who both started as sophomores last year, and TE Camarena, another three-year starter. Saikhon also caught 30 passes for 625 yards and five TDs and had seven interceptions on defense.