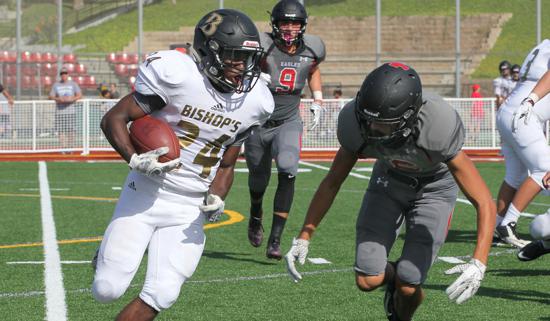 Scouting report: The Knights, who lost in last year’s section final after winning the Division IV title in 2014, will need to stay healthy to make a run at a third straight appearance in a championship game. Allen thinks that is possible despite having just 18 players out during the summer. Two-time all-leaguer Anderson leads the defense along with Woodley, who is drawing interest from Ivy League schools. Moses-Hillman should find plenty of space to run the ball behind Cramer and Eldridge, who are 250 and 270 pounds, respectively.

Scouting report: Coming off a down year, the Lancers are determined to regain their winning form by installing a spread offense using four receivers and a single-back attack. Sanborn will run the offense. Gallanis leads the defense that is also changing, to a 4-4.

Scouting report: The Panthers have enough quality athletes to play in the rugged Coastal League, if they can avoid injuries. Nelson has drawn interest from several colleges, Daniels was named the top junior at the LSU camp and Marcus has drawn interest from Washington. Jones, who was raw a year ago, has matured into a player. He also qualified for the San Diego Section’s 100-meter dash last spring.

Scouting report: The Torreys, who won the Division V title in 2014, will go as far as the Burmeister-led offense and a defense with 10 returning starters can take them. Burmeister, who is committed to Arizona, needs about 2,000 yards to become the section’s all-time leading passer. It’s not all Burmeister. Hales believes he can run the ball if the offensive line comes together. Despite having 17 seniors in their third year as starters, staying healthy is the key.

Scouting report: The Patriots moved over from the Valley League with a new spread offense. Bailey has the size to stand in there as the starter again, but it will be up to receivers Russell, Montes, Mercado and Ramos to find the openings in the secondary. How the defense matches up with the differing offensive styles in the league will determine if this season will help make football fun again on campus.

Scouting report: The league-champion Eagles are poised for another title run with 19 returning starters, led by Whitton on offense and Phillips, the league’s defensive player of the year in 2015. Whitton passed for 1,547 yards and 19 TDs while throwing just three interceptions as a junior. Five returners on offense were all-league while four more made the team on defense. Dill is the top returning tackler with 64 stops and 12 sacks last season. Washington had 56 tackles and eight sacks.