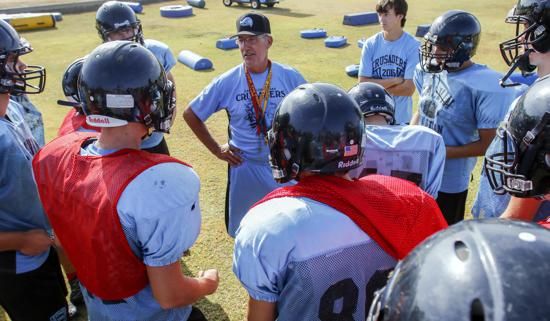 Scouting report: Riley, the school’s athletic director, takes over the league co-champions and inherits all-league players in Feather, Seydel, Greenawald and Figueroa. He also installed the I-back offense as well as changing the defense to a 4-4. The Royal Knights will play home games at Olympian High.

Scouting report: After leaving 11-man football following a forfeit in 2014, the Crusaders made their first 8-man season a success, sharing the Ocean League title and winning the section championship with a 765-yard effort on offense in the finale. With Lafler back for a third season, Kreglow plans to open up the offense a bit more with an eye toward still running the ball with Crouch, Wesley and Senti doing most of the work. Kreglow calls Brower unblockable on defense.

Scouting report: Switching to eight-man after a winless 2014 was worthwhile for the Knights. Hoffman was among the state’s best quarterbacks as the team missed the postseason by one win. Offense is the strength of the team after being ranked No. 2 in the state in passing yards per game.

Scouting report: The emphasis was to run the ball more and the Warriors did that right up to the section finals when they lost 68-8 to Calvin Christian in the school’s first championship game in any sport. This team will be fairly young, though Schwartz believes there is still a lot of talent to make another run to the finals.

Scouting report: Two years ago, the Lions were winless. They won just once last year, but the goal is way beyond that number this year. One area of improvement is in the trenches with Muller, Moossazadeh — his teammates just call him Moose — Xia, Nachassi and Vilenski.