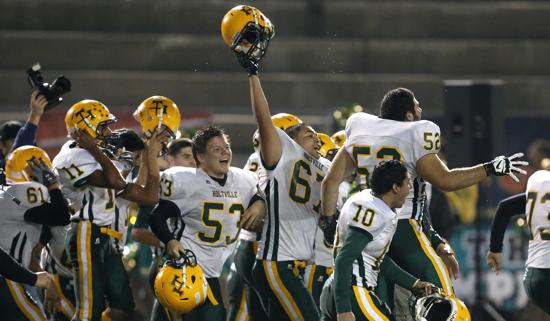 Scouting report: Swearingen, the founder of the Imperial Valley Coaches Association, ended five years of retirement to coach Calipatria after previous head coaching stops at Imperial, Brawley and Southwest high schools. Ruvalcaba averaged 91.8 yards rushing per game last season in his four games of action. The Hornets have not won a league contest since the 2012 season, when Calipatria shared the Manzanita League championship with Holtville and Mountain Empire.

Scouting report: The Vikings are coming off their first losing season since 2009. At 5-10, 265 pounds, Vargas brings beef to the line as a returning all-league selection. Bolin was Holtville’s top receiver and top kickoff returner last season. As a junior last year, Castro rushed for 752 yards (fifth best in the league) and passed for 509 yards (third best in the league). When the Vikings host Calipatria in the regular-season finale, Smith will be coaching against Mike Swearingen, the coach Smith played for at Brawley High in the early 1990s.

Scouting report: The Knights are competing in a different league for the fifth consecutive season, having previously played in the Pacific, Ocean, Citrus and Sunset leagues. Lutheran hopes to elude the injury bug that forced the Knights to play with just 10 players in the second half of the 2015 season finale against Army-Navy. Colton Allen, son of coach Ron Allen and brother of former NFL Defensive Player of the Year Jared Allen, will also handle the long-snapping duties. Lutheran played 8-man football in Coach Allen’s first season before moving up to the 11-man game in 2013.

Scouting report: As a junior, Parra was one of only two quarterbacks in the Manzanita League to pass for more than 1,000 yards (1,203 yards, 12 touchdowns, 10 interceptions). Jarrell and Stogsdill were both second-team all-league selections on defense last season. Prince is the only returning player who started as a freshman last year. Mann was the team’s second-leading receiver last season as a sophomore with 14 receptions, including five catches for touchdowns. The RedHawks are looking to get back to the championship form that produced back-to-back Manzanita League co-championships in 2011-12.