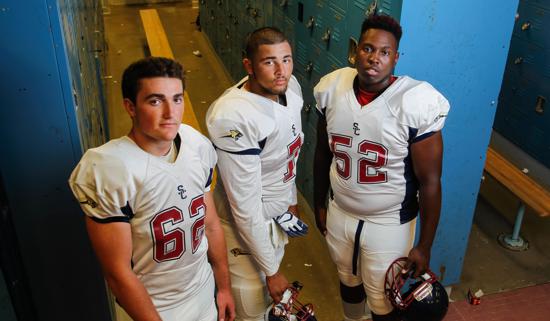 This is what you get sometimes as a high school football coach . . . and Steele Canyon’s Scott Longerbone will gladly take it.

Senior Kyree Woods is an only child from Spring Valley whose single mother had the wherewithal to enroll him in Albert Einstein Charter in Golden Hills . . . and he thrived.

Senior Caleb O’Gorman is a brainiac from Alpine whose upper-scale parents pushed for perfect grades . . . and he delivered.

Woods (6-feet-3, 285 pounds), O’Gorman (6-3, 255) and Oliver (6-4, 240) form the nucleus of a big and talented offensive line, and they are the three highest-recruited players for the Cougars, who expect to challenge for a championship this year.

“We’re going to go as far as that front line takes us,” Longerbone said. “I mean, we’ve got other good guys, but those guys are the anchors.”

On the recruiting front, Woods, a guard with a 3.85 GPA, is looking into engineering programs at UCLA, SDSU, Missouri and a trio of Ivy League schools, and they are looking at this four-year starter, who also plays defensive tackle.

O’Gorman, a tackle who carries a 4.58 GPA and is taking five Advanced Placement courses this year, basically has his pick of Ivy League schools and says Yale is his favorite. He also plays defensive end.

Admittedly, Oliver struggled in school most of his life. The family moved frequently, often times they lived in motels or were taken in briefly by family members or friends. Oliver’s academic eligibility was in serious jeopardy until, oddly, shortly after his family became homeless once again last season.

That’s when Longerbone stepped in, opening his home for Oliver while his mother tried to find work and a permanent place for Mikel and his three younger siblings. In addition to room and board, Longerbone provided mentoring and guidance and convinced Mikel to get serious about his studies.

“I had never excelled at school. I always had to make up grades. This is the first time I’ve ever been in good academic standing. Coach Bone really put me on a good path.”

As a sophomore tight end, Oliver had 18 catches for 268 yards and two TDs. At defensive end, he was among the team leaders in tackles and sacks, as were Woods and O’Gorman.

Woods is probably the strongest, having squat pressed a school-record 565 pounds in competition and 610 unofficially. If he stays healthy, Woods will have played more varsity games than anyone in Steele Canyon history. He also excels in basketball (power forward, of course) and track (shot put and discus).

“Kyree really wants to play college football,” Longerbone said, “and he works hard to make sure that will happen — on the field, in the weight room and in the classroom.”

O’Gorman is certainly the most driven in school. He went 3-for-3 in passing Advanced Placement tests last year and is a good bet to make it 5-for-5 this year. “If I need to find Caleb,” Longerbone said, “I go look in the AP lab.”

A diverse trio, for sure, but bonded by their commitment to win.

“These guys are our rocks,” Longerbone said. “And they’re all different dudes.

“They’re all very driven for success in different ways.”