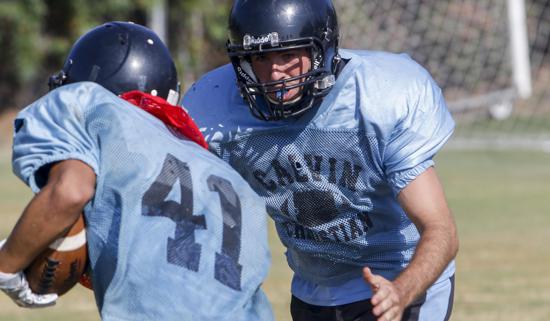 Calvin Christian senior Mason Crouch (right) plays defensive end and running back for the Crusaders, who captured the San Diego Section 8-man championship last season with a win over The Rock in the finals.

ESCONDIDO — It’s among the most unfulfilling things in high school sports.

When a team forfeits a game, no one knows how to handle it. Should you be angry? Or ashamed? Humiliated?

That goes for both teams. The triumphant team doesn’t know how to act, winning a game it never even played.

Calvin Christian knows that feeling. Twice in their last three 11-man football seasons the Crusaders were forced to forfeit games because they simply ran out of players.

That marked the end of 11-man football at Calvin Christian.

In their first season playing the 8-man game in 2015, the Crusaders not only won the Ocean League championship but tacked on the San Diego Section title with a 68-8 win over The Rock in the finals.

It marked the first championship in football for a school that had a 9-2 record in 2008 and an 8-4 mark in ’09 but only one winning season since.

“I look at our banner in the gym every time I go in there,” senior defensive end-running back Mason Crouch said. “One day I’m going to show my kids my banner.

“More importantly, we never have to hear the word forfeit ever again at Calvin.”

The 6-foot-2, 185-pound Crouch sustained torn elbow ligaments in last year’s finals, but he stayed on the sidelines through the remainder of the game to celebrate the resurrection of the program.

It may have taken a little bit of the excitement from the moment, but not enough to miss the trophy presentation.

“We’d already seen the worst side of sports, twice,” said Crouch, in his fourth season on the varsity. “I was hesitant at first to move to 8-man, but after the first game I knew this was perfect for us.

“Winning that championship is a really hard thing to describe my feelings. It was awesome. Crazy. Where we had been to CIF champions was a surreal night.”

The site of the championship game had been decided long in advance and, fittingly enough, Calvin Christian was the location.

The Crusaders’ fans were solidly behind the change.

“I told the parents this would be safer for their kids, it would allow us to have a junior varsity and it was still football,” Kreglow said. “Doing what we did last year was never possible in 11-man.

“We were playing teams physically too tough for us. We had to do something if we were going to keep playing football.”

The last thing the Crusaders wanted to do was put even more forfeits in their players’ memory.

Adding a championship to the players’ high school résumés was cheered in the community.

“I think the kids are still celebrating,” Kreglow said. “They clinched the title early on in that game so they got a head start on the celebration.

“The only thing left to do is win it again.”