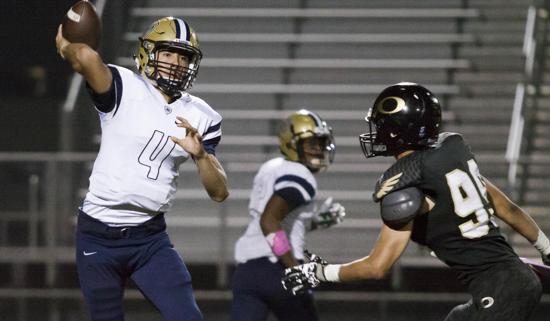 As a junior last season, Bonita Vista's Anthony Posada completed 135 of 225 passes for 2,269 yards and 15 TDs with just eight interceptions.

Though the Barons were 2-1, he didn’t like the way things were progressing. Scrolling down the roster, he made a decision.

For only the second time in a 26-year career, he would start a freshman. The difference is this wasn’t a 6-5, 275-pound man-child or a lightning-fast wide receiver. He would put his team in the hands of a 14-year-old who had to get clearance from a doctor just to play at that young age.

“He had a way about him,” Thompson said of quarterback Anthony Posada. “He wasn’t your typical freshman. I felt he could handle the offensive schemes. He just had ‘it.’

“He had helped us beat the Mission Hills JV team and I told him that he was starting the next game.”

That decision didn’t look so great after the Barons lost that game and the next, but Thompson never wavered. Now Posada, a solid 6-foot-1, 200-pounder, will be behind center for the fourth straight year when Bonita Vista opens the season at Poway on Friday.

“I wasn’t scared, but I was a little nervous,” said Posada, who last season led Bonita Vista to a runner-up finish in the state Division IV-AA championship bowl after directing the team to its first San Diego Section Division III title.

“There were a lot of challenges, but it was pretty fun. I was only 14, but seniors like (nose guard) Ricky Alvarez, (defensive end) Trevor Kemp and (wide receiver) Robert Garza made it easy. My first touchdown pass was to Robert Garza. He was my go-to guy.”

Most of Posada’s friends, though, were a class ahead of him so he knew last year’s team would be strong. Though the Barons under Thompson are still run-oriented, Posada completed 135 of 225 passes for 2,269 yards and 15 TDs with just eight interceptions.

He’s looking to improve on the 60 percent completion rate with the graduation of Greg Bell, who rushed for 2,632 yards and scored 34 TDs, and the return of two of his top receivers, Keenan Ellis and Jacob Rozar.

Can he guide the Barons, who were 12-3 in 2015 and have beefed up their schedule even more, back into the section and maybe state playoffs?

“I don’t know why not,” Posada said. “We have a huge offensive line and a lot of people who played together on the Bonita Bucs (American Youth Football team). But the goal remains the same — beat Eastlake and win the Mesa League.”

Thompson is a little perplexed as to why Posada hasn’t received more college offers.

“If he has the year I expect, they’ll come,” said Thompson. “He has it all. Of course, I’m biased, but a four-year starter with great leadership ability, a very tough kid, with great grades (3.5 GPA) who has the size. Don’t worry, they’ll come.”