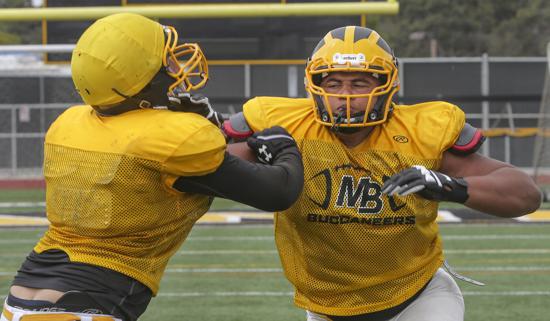 Too big for Pop Warner, Kaydence Jackson had never played a down of tackle football when he tried out for Mission Bay High’s junior varsity team as a freshman. Following the Boys Scouts’ “Be Prepared” creed, Jackson logged onto YouTube to figure out the correct way to strap on shoulder and girdle pads and mold a mouthpiece.

“I didn’t want to embarrass myself in front of the coaches,” said Jackson.

He started one game that season. But when you’re blessed with intimidating size (Jackson now stands 6-feet-3 and weighs 280 pounds), quick feet and an insatiable desire to improve, progress can be rapid.

Jackson earned second team All-San Diego Section honors as an offensive lineman last season as a junior, and offense isn’t even his favorite side of the ball.

“The sky’s the limit for him,” said Mission Bay defensive coordinator Mel Galli.

Now college recruiters are beating a path to Grand Avenue and head coach Willie Matson’s office in pursuit of Jackson.

Jackson’s tale is one of a teenager coming to football relatively late, realizing he was blessed with physical gifts, wanting to maximize those gifts, all the while motivated by his mother’s relentless grit.

Yet there was a time when Matson wondered if Jackson was too nice for football.

“If he wanted to, he could be ASB president,” said Matson. “Kids like him that much. He’s not a bully, big kid. He’s got a big smile and talks to everyone.”

But could he flip the switch from nice guy to gridiron menace? The first hint that Jackson might tap into his potential came after his sophomore season, when he improved enough after his modest freshman year to start on the varsity at left offensive tackle.

Jackson was playing JV basketball as a sophomore when Matson told him that if he wanted a free college education, football, not basketball, would be the path. Jackson quit the basketball team and began lifting weights, three times a day, four days a week.

By last August his weight had mushroomed from 220 pounds to 265 in seven months. On the field, Jackson remained at left tackle on offense, plus mixed in plays at defensive tackle. After a while, Jackson became so disruptive he was playing every down on offense and defense.

New Bucs offensive coordinator Jason Carter installed a no-huddle offense, and during classroom grease-board sessions he’d draw defensive formations, call out plays and ask what the receivers were supposed to do.

Flummoxed, the receivers and quarterbacks would be library quiet. Then Jackson sheepishly raised his hand and answered correctly.

“His football IQ is off the roof,” said Carter, who played wide receiver at Texas A&M, plus had a brief NFL and Canadian Football League career. “He’s one of the smartest football players I’ve ever been around.”

As for the Mr. Nice Guy, Jackson’s still a gentleman off the field but has no qualms releasing his wrath once the whistle blows.

“On the football field he’s an absolute beast,” said his mother, Noa Rachel Jackson. “It’s ridiculous. Sometime I feel like I have to apologize to players when he smashes them to the ground.”

There is a charming naiveté to Jackson. His mother nicknamed him “Tater Tot” when he was a toddler because of her son’s then-squatty physique. His older sister shortened the moniker to “Tay-Tay.” To friends, Jackson answers to “Tay” or “Tay-Tay.”

When one college recruiter talked to Jackson at Mission Bay, Jackson was wearing an oversized sweatshirt. The coach playfully jostled Jackson about the shoulders and arms.

“Coach,” Jackson said to Matson after the recruiter left, “that guy sure was friendly.”

“Kaydence,” Matson replied, “he wasn’t being friendly. You were wearing a sweatshirt. He wanted to see if that was fat or muscle.”

Recruiters have discovered that Jackson, a young senior who turned 17 this month, is mainly muscle.

Said Matson, “A lot of the (college) coaches just turn to me as he’s walking (from) 50 yards away and say, ‘That’s a good-looking kid.’”

To find Jackson’s inspiration all one must do is look at the tattoo on the inside of his left bicep. In Hebrew script is his mother’s name, Rachel, who was born in Israel.

“He put me out of the house,” Rachel said of her ex-husband. “I didn’t have anywhere to take the kids. I had no job, no income, no savings. I left the house with the clothes on my back and a rundown little car that hardly functioned.”

For about half a year, she bounced between friends, spending a couple of hours nearly every night with her children, who lived with their father. Then she rented a room and moved the kids in with her. Later, she earned a master’s degree, landed a federal government job and moved into her own apartment, bringing the kids with her.

Meanwhile, Jackson hasn’t spoken to his father in three years.

“I think he lives in Maryland,” he said.

As for his mother, he said, “My mom kind of started from the ground up.”

Sitting in a classroom after the Bucs’ first day of August practice, Jackson clenched his big right fist and tapped his chest. “She holds the most special place in my heart,” he said.