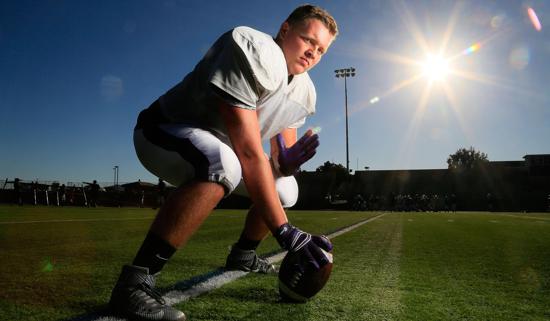 Junior Trent Forster is a team captain for Santana this season. His great-uncle, Terry Forster, was the San Diego Section Player of the Year in baseball for the Sultans in 1970.

SANTEE — The Forster family tree would be a natural fit among the championship banners at Santana High.

One of Santana’s most famous alumni, Terry Forster, graduated in 1970 and pitched 16 years in the major leagues. Terry’s twin brother Larry and older brother Gary also played baseball for the Sultans.

Gary’s son, Darrin, is a 1989 alumnus who earned a baseball scholarship to Grand Canyon University.

“They’ve all been great athletes, great students and very respectable people,” said Larry Oedewaldt, Santana’s vice principal in charge of athletics. “In the community, when you hear the Forster name, people who know them crack a smile and have many fond memories of the Forsters at Santana.”

Trent recalled a childhood full of stories about his father’s playoff performances and his great-uncle’s dominance on the mound.

Instead of being afraid to live up to the family’s history, Trent said that the accomplishments have only motivated him more.

“I’ve been trying to fit in their footsteps and keep up the family legacy at Santana,” Trent said. “Just by seeing that it is possible to play Division I or play in the major leagues, it makes me want to shoot higher.”

While Terry’s left arm is what propelled him to fame, his resolve guided and inspired generations of Forsters.

Darrin speaks fondly about how Terry was born with a back issue but didn’t let it stop him. Doctors told Terry that he’d never play sports, but he was driven to prove them wrong. While football wasn’t an option, Terry was known to throw the pigskin virtually the length of the field.

With that arm strength, high school hitters didn’t stand a chance. Batters used to celebrate hitting foul balls off Terry, who was drafted in 1970 and made his big league debut the following year.

While it’s fun rehashing Terry’s career or his own glory days, Darrin said he gets more enjoyment watching Trent wear the purple and gold proudly.

“It puts it in perspective for me. It’s great to watch your son grow up and follow in your footsteps at the same place you went,” Darrin said. “You want to see your children do better than you.”

Trent played baseball his freshman year, but was more drawn to football. That hard-working Forster spirit paid off as he cracked the starting lineup as a sophomore and was named team captain this season. In addition to leading the Sultans on the gridiron, Trent carries a 4.4 GPA and is weighing his college options.

Trent leads a Santana team that plans to build off last year’s 7-5 record. The Sultans defeated Central in the first round of the San Diego Section Division IV playoffs for the school’s first postseason win since 2011. Trent joins a bevy of returning starters that includes running back Bobby Wallace, receiver Aidan Rasmussen and linebacker Spencer Gulihur.

Josh Oedewaldt, the vice principal’s son, takes over at quarterback for Frankie Gutierrez, who graduated as one of the most decorated athletes in Santana history.

“That win was really big for us last year,” said Sultans head coach Tim Estes, whose team opens the season against Bishop’s at 7 p.m. Friday at Francis Parker. “The guys who were on that team last year and are coming back really took pride in that and said, ‘We want to do better than that this year.’ … They’re very hungry to win more playoff games.”

The Forster story at Santana won’t end with Trent’s graduation. His younger brother Jared is an eighth-grader at Cajon Park Middle School.

Dennis said Jared is “counting down the days” until he can take the field for the Sultans.