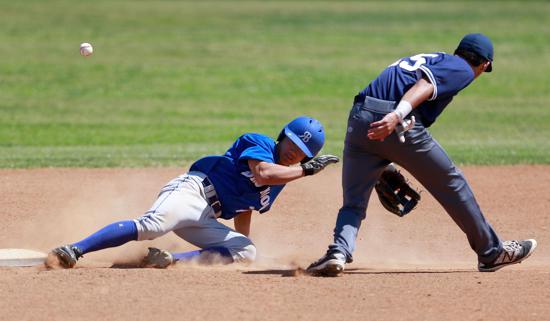 Tora Otsuka, shown stealing second base for the Broncos, said he needs “to become a leader on the team and try to push my teammates so we can all get better. . . .”

A 5-foot-8, 170-pound high school outfielder doesn’t usually grab the attention of Division I college coaches. It takes something special for a player that size to be considered for a baseball scholarship.

USD believes Tora Otsuka has what it takes.

The Rancho Bernardo High senior recently committed to the Toreros, overcoming his small stature with extraordinary speed, range in the outfield and bat control.

“I think my speed on the bases and my contact skill is what they liked,” said Otsuka, who had a breakout junior season for the Broncos, hitting .404 with five home runs and 28 RBIs with just 10 strikeouts in 134 plate appearances. “I think my ability to track balls in the outfield was also a big factor for USD giving me a scholarship.”

Otsuka entered Rancho Bernardo’s program as an infielder his freshman year. Soon he was converted to an outfielder and Otsuka says it was a surprisingly easy move.

“It came naturally to me,” he said. “I just worked a lot on my first steps during batting practice. One of the things that was hard for me was seeing the ball, running to the spot, seeing it again and then catching it. I worked on that a lot with coach (Sam) Blalock. I think all the practicing we did with that helped a lot.”

Indeed. Not many look smoother than Otsuka when tracking down a deep fly ball. He says it came naturally, but he did have some practice catching towering fly balls as a youngster. Otsuka’s father, Akinori Otsuka, pitched for the Padres and Texas Rangers before elbow surgery in 2008 cut his career short. But while Akinori was playing professionally, Tora was often shagging balls in the outfield during batting practice.

“Those were the best times,” recalled Tora, who bats left-handed and throws right-handed. “That was the most fun thing I did when I was little. That is how I started playing baseball.”

Akinori now coaches the Chunichi Dragons in a Japanese professional league. But he still has time to give Tora some pointers.

“He teaches me everything he knows,” Tora said of his dad. “He brings so much to the game and it is just great to have his brain to pick. I ask him a lot of questions and he always has an answer.”

Otsuka has played every season at the varsity level at Rancho Bernardo. He hit .312 his freshman year and .294 his sophomore season before putting together the monster junior campaign. He credits his change in approach at the plate for the outburst.

“I just really focused on every pitch,” Otsuka said. “I also spend more time studying pitchers when I am in the dugout. I try to keep it simple.”

Otsuka, who was part of the Broncos’ 2015 Open Division championship team, is hoping to win one more title before departing for USD. Rancho Bernardo went 24-10 before a disappointing 1-2 showing in the Open Division playoffs last season.

“I hope we have better team chemistry this year,” Otsuka said. “We didn’t play that well as a team last year. I think we had the attitude that we won the year before so (we can just show up and win again). I had a bad feeling about that, too, but I didn’t know what to say to the team.

“Next year, I have to become a leader on the team and try to push my teammates so we can all get better and win a championship.”

Sounds like another special quality USD will be happy to have.