With a new stadium in place, Panthers will turn attention to scoreboard 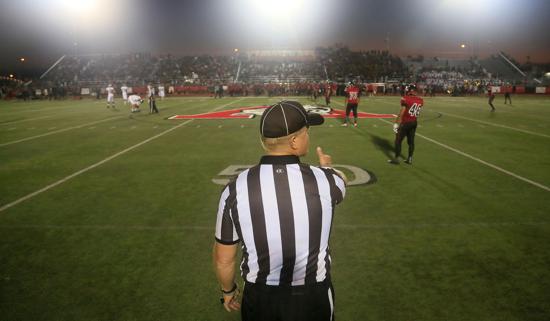 Players are in position for the kickoff at the new Dick Haines Stadium in Vista, where the storied Panthers seek a return to glory.

His booming voice still seems to echo in the stadium that bears his name.

One night before the bulk of the county kicks off the high school football season, Vista High on Thursday rededicated Dick Haines Stadium to the man who changed the face of prep football in San Diego.

Haines, who came to Vista from Ohio in 1970, led the Panthers to three county titles with all three of those teams going 13-0.

The reconfigured stadium lost some seats, but Vista supporters filled the new home side on Thursday.

“I hate Dick Haines,” said Valley Center coach Rob Gilster, who has five county titles of his own. “Before Dick came to Vista, we all took the summer off.

“After he got here, you either worked all summer or got your head handed to you.”

But the once-proud Panthers have fallen on hard times, going 14-29 the last four seasons.

It’s up to new coach Dave Bottom to bring back the glory in a stadium Haines might not recognize.

The old home side on the east end is now the visitor’s side with the setting sun in the players’ eyes.

The west side is the home side and rises 16 rows and goes goal to goal.

There are three rows in front of that for band members and guests.

The playing surface was replaced a year ago, so it stayed, but there is a new track.

“There is no more pressure to win here than any other school,” said Bottom, who turned around a downtrodden program at Everett Alvarez High in Salinas with a wing-T offense before coming to Vista.

“But there is an excitement, an air of anticipation you don’t get many places.

Martha Haines was one of Thursday night’s featured guests. But she almost didn’t attend.

“When they first invited me, I wasn’t going to come,” Martha Haines said.

“Then Dave called, we talked, and I decided to come. I’m so glad I did.”

Bottom has the luxury of playing for a principal who emphasizes athletics.

“We certainly don’t know what the end will be, but I’m awfully pleased with the start,” Barela said.

“The new stadium is a great, a tremendous community asset.

“We think we have the facilities and the coaching staff to turn this thing around.

“One thing is for certain, though. We’ll win with class, and we’ll lose with class because that’s what Dick Haines was all about.”