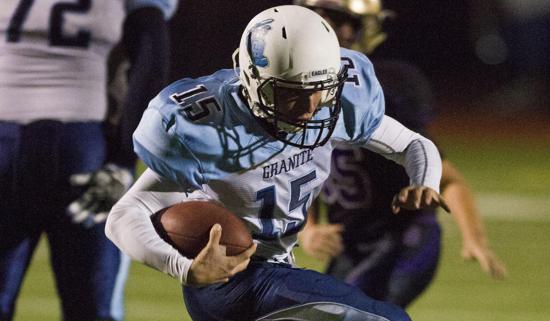 San Pasqual (0-1) struck first, scoring on a 1-yard run in the second quarter by Spencer Pugh. That lead held until Ostreng scored on a 42-yard run midway through the third quarter. Bryce Strickland’s extra point gave Granite Hills its first lead of the game 7-6.

Shortly before the end of the third quarter, Granite Hills linebacker Durade Aqili intercepted a Nick Hurst pass and returned it 11 yards to the end zone for a touchdown.

Hurst found Adam Campos for a 26-yard touchdown pass to cut the deficit to 14-12. However, a Hurst pass on the two-point conversion attempt sailed out of the corner of the end zone. The Granite Hills defense held from there.

Granite Hills used a two-quarterback offense, with Ostreng and Jake Siegfried under center, but running the ball most of the time. Siegfried rushed for 48 yards on seven carries.

Hurst finished 6 of 15 through the air for 106 yards, one TD and two interceptions. San Pasqual had an effective running game, led by Saud Carillo (96 yards) and Pugh (61 yards).