Broncos have no trouble in win over Eastlake, despite playing without top runner 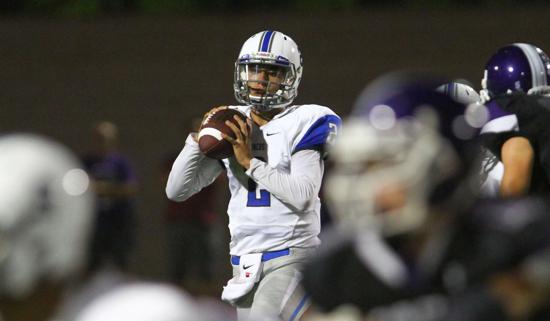 CHULA VISTA — When Rancho Bernardo coach Tristan McCoy was asked what he thought Eastlake’s first-year football coach Dean Troop would use to fire up his club for the season opener Friday night, he didn’t hesitate.

“They’re going to use the fact that since we’re the defending state (Division III-A) bowl champions, we have a target on our back,” said McCoy.

Sure enough, before the game Troop said he talked up the fact that RB was a state champion and a victory would set the tone for the season.

Even without all-section second team running back Milan Grice, out with an injured ankle, the fifth-ranked Broncos erupted for 21 points in the second quarter — 14 of them just 47 seconds apart — downing the hosts 38-0.

Veteran quarterback Mark Salazar was too much for Eastlake both with his arm and legs.

Salazar’s 10-yard keeper with 4:48 remaining in the first half came less than a minute after Kaelan Pestano’s 50-yard TD run broke the scoreless tie. Alex Buck’s fumble recovery led to the second score.

Salazar continued to show off his arm as he completed 13 of 16 attempts before intermission, including a 4-yard strike to Leo Wagner 58 seconds before the break to move ahead 21-0. On the play, Salazar had his choice of three open receivers.

Meanwhile, the defense shut down the Titans’ passing game, allowing just two completions, refusing to allow Eastlake inside the 20 the entire game.