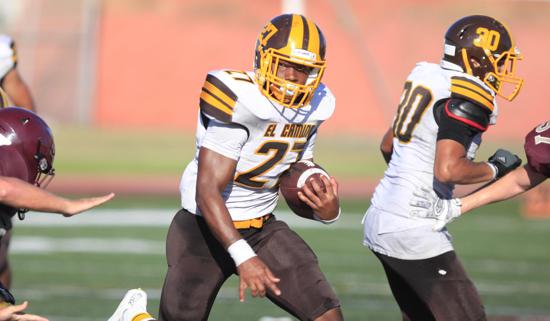 Brown rushed for 155 yards and two touchdowns, intercepted a pass, broke up a pass at the 3-yard line to help secure a fourth-quarter goal-line stand and broke off a 24-yard run that set up Casey’s 24-yard fourth-quarter TD pass to Manny Kariuki.

Casey connected on 10-of-15 passes for 146 yards — including five to Wayne Steward.

Point Loma completely dominated the first quarter, holding the Wildcats to 7 yards in the opening 11 minutes on two short runs by Brown.

Meanwhile, Antonio Quintanilla ran for 88 yards on eight carries and the Pointers held a 130 yards to 27 yards edge in total offense entering the second period.

But the Pointers only took a 2-0 lead into the second quarter, the points having come when Patrick Rutledge tackled an El Camino ball carrier in the end zone for a safety.

El Camino stopped Point Loma at the 2-yard line with a crucial goal-line stand late in the quarter and carried the momentum into the second period.

That’s when the game changed as Brown broke loose on touchdown runs of 9 and 32 yards and the Pointers turned the ball over four times in the quarter.

Point Loma fumbled the ball away three times and Brown intercepted a pass.

El Camino held a 14-2 halftime edge despite losing a fumble at the Pointers 15 and the margin could have been bigger if the Wildcats hadn’t lost the ball on a fumble at the tail end of a bad snap for a 24-yard loss after driving to the Point Loma 15.