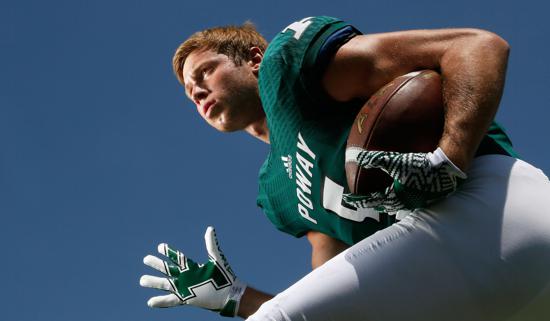 POWAY — No need to ask Jared Adelman what he was doing in the offseason. The Poway High senior running back showed everyone in Friday night’s season opener.

Adelman was strong from start to finish, carrying the ball a whopping 45 times for 291 yards and a pair of touchdowns in the Titans’ 33-14 victory over visiting Bonita Vista in a non-league game.

The 6-1, 181-pounder was a workhorse right from Poway’s opening possession, carrying the ball nine times for 55 yards, including a 4-yard scoring run that capped a 13-play drive.

He showed off his conditioning in the fourth quarter, getting 13 carries during the Titans’ 19-play, 8-minute, 50-second scoring drive that put the game out of reach. Adelman ran for 59 yards on the march, including a 6-yard score.

Poway quarterback Robbie Sullivan took advantage of the running game, which was powered by Wesley Thompson and Peter Neil on the offensive line. He found several receivers on play-action passes, including a beautiful 15-yard TD toss to Chasen Cowling to make it 26-7 with 10:29 remaining. Sullivan also threw touchdown passes to Chris Butler and Padraig Madden.

Bonita Vista, coming off a San Diego Section Division III championship, was down 12-0 at halftime but opened the second half with a bang. Keenan Ellis returned the kickoff 95 yards for a TD to cut the deficit to 12-7. After 14 straight points by Poway, Ellis capped a nice night with a 41-yard touchdown reception.