Westview coach gets a special win

Kyle Williams guides Wolverines past his former team in Fallbrook 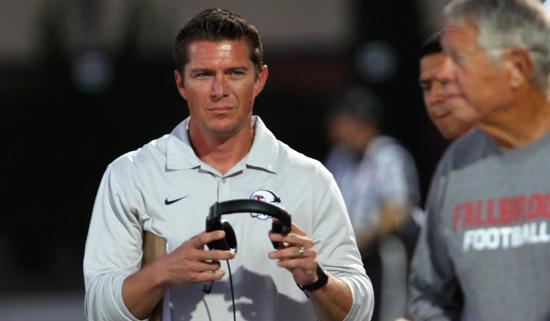 Friday, he returned to the home of the Warriors for the first time as a visiting head coach, shaking hands with old friends before the game and wishing his former players good luck.

“I owe Fallbrook a lot,” Williams said. “Fallbrook gave me a chance to be a head coach, to get some valuable experience.

“But I played at Poway High and the chance to come back and coach in the Poway district was something I couldn’t pass up.

“Still, coming back to Fallbrook is kind of emotional.”

Williams and his Wolverines were able to control their emotions and grind out a 14-0 win over the Warriors and new Fallbrook coach Bob Burt.

Westview scored the only points of the first half, with AJ Leonard bulling in from 6 yards out to cap a 17-play, 84-yard drive that ate up nearly eight minutes in the second quarter.

Leonard finished the game with 23 carries for 134 yards.

The Wolverines were on the march again at the end of the half, getting to the Fallbrook 21 with 23 seconds to play before Charlie Bickel recovered a Westview fumble.

Westview opened the second half with a nine-play, 67-yard drive, with wildcat quarterback Jackson Nau scoring on a 6-yard run.

The Wolverines lost a fumble at the Fallbrook 7 late in the game, ending an 11-play drive. Westview ran the ball 45 times and threw just 11.

Nau rushed nine times for 56 yards and completed his only pass attempt for 22 yards.

Burt, a 74-year-old with more than 209 wins on the prep level, a CIF Southern Section championship at Temescal Canyon and a fine college coaching résumé, was coaching his first game as Fallbrook’s head man.

The Warriors had several good drives and even had a fourth-down pass dropped in the end zone.