Foothillers roll up 409 total yards for easy win over Morse 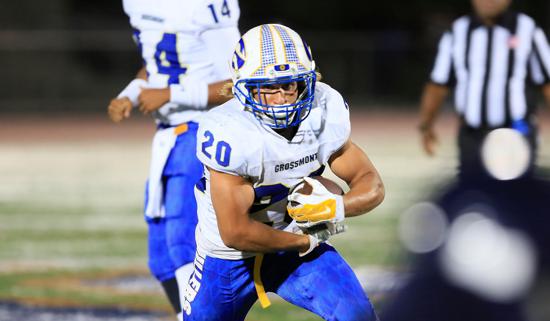 Grossmont running back James Mackey looks for an opening against Morse.

Two of the older high schools in the county squared off Friday for only the second time in the regular season, and Grossmont’s 31-12 victory over Morse was similar to last year’s first encounter.

Hunter Gaines was 7 of 24 passing for 122 yards and a 41-yard touchdown pass to Domonique Guevara, who finished with four catches for 94 yards.

Sterling got the Foothillers on the board late in the first quarter, taking a handoff on a middle run for a 46-yard TD.

Gaines followed that two minutes later with a 23-yard TD scamper on a quarterback read run.

Late in the half, Grossmont made it 21-0 as Jailen Bailey took a reverse run 15 yards into the end zone.

The Foothillers gained 229 yards in the first half to just 47 for Morse, who began with five straight three-and-out possessions.

Sterling opened the second half with a 39-yard run, leading to a 24-yard field goal from Cristopher Garcia and a 24-0 lead.

Morse got one last score late in the game on a 34-yard touchdown pass from Martell Irby to Markus Turner.

Grossmont’s defense played particularly well in the first half. Luke Morse, Cooper Zoellner and Noah Sanders posted sacks for the Foothillers. Eric Shanks recovered a fumble. Joe Williams had a huge stop on a fake punt attempt that resulted in a 12-yard loss.