No. 1 Helix defeated by Utah team 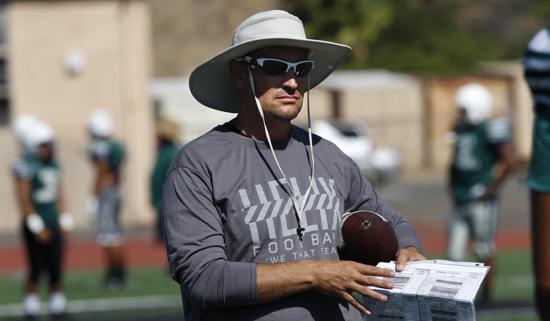 Helix was defeated Saturday in its first game under new coach Robbie Owens.

LA MESA — There is a reason Helix is the top-ranked prep football team in San Diego.

The Highlanders are big and fast on offense and fly to the ball on defense.

Timpview, however, is no ordinary team.

Over the last 10 years, the Thunderbirds are 115-16 with five state championships.

Helix is 101-22 with one state title over that same period.

Two years ago, Timpview came to San Diego and beat a talented Mission Hills team 42-28 with quarterback Britain Covey running and throwing for 322 yards. Covey starred as a freshman receiver at Utah before leaving for his Mormon mission.

With both teams running no-huddle, up-tempo offenses, Helix led 21-13 at the half.

The second half, however, was all Timpview.

After a scoreless third quarter, Timpview starting quarterback Jake Biggs returned for a set as a wildcat QB and ran the ball five straight times from the Helix 24, scoring on a 2-yard run. Lined up as a wildcat again, he scored on a 2-point PAT to tie the game at 21 with 8:39 to play.

Biggs returned to the wildcat on Timpview’s next series and picked up a key first down on a fourth-and-1.

Two plays later, QB Jordan Mariteragi and Eric Calantoc hooked up on a 44-yard scoring pass, giving Timpview its first lead of the game with 5:02 to play.

After a Helix punt, Timpview ran the clock down to 10 seconds before it had to punt.

Rashad Scott broke in and blocked the punt with Michael Shawcroft picking up the loose ball near midfield.

Shawcroft appeared to have a convoy down the sideline but was tackled at the Timpview 24 with 1 second to play.

With Helix down to one play, quarterback Carson Baker’s pass, under heavy pressure, was incomplete.

The teams combined to run 145 plays for 900 yards total offense.

Baker completed 18 of 28 passes for 350 yards while Scott Young had 10 catches for 234 yards. The Highlanders rushed for just 68 yards on 32 attempts.

Each Timpview quarterback was intercepted once — Biggs by Scott and Mariteragi by Jayden Tauanu’u.