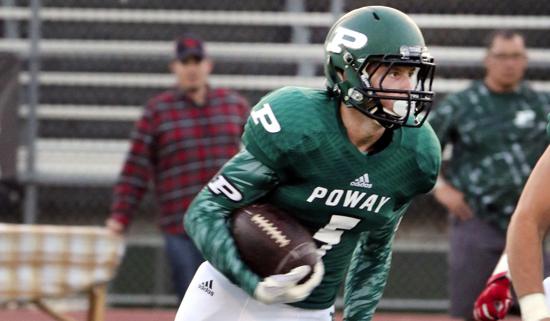 Poway running back Jared Adelman — a 6-foot-1, 180-pound senior — usually plays on both sides of the ball, but he was rested on defense last week because of his heavy load carrying the ball on offense.

POWAY — Jared Adelman stays after each Poway High football practice with some of his teammates for optional conditioning. The group runs 10 100-yard sprints, hoping it helps keep them going strong deep into the fourth quarter of games.

If last Friday night was any indication, it works.

“I feel pretty sore,” Adelman said with a chuckle Sunday evening. “Forty-five times is a lot. I certainly didn’t expect it. We just kept calling ‘Power’ over and over again. I loved it and I have to give it up to my offensive line because they just dominated.”

The 291 yards were a career best for Adelman, who had touchdown runs of 4 and 6 yards. The Titans called “power left” or “power right” (both running plays that pound off the left and right of the center) a combined 36 times in the game. The young offensive line created a surge on nearly all of them.

“We averaged over five yards a carry on that one play,” Poway coach Damian Gonzalez said. “The incredible thing is not one kid on that offensive line is a returning starter, but Jared did great. He really had great leg drive, so that was outstanding.”

And Adelman still had plenty left in the tank, even after the clock struck all zeros.

“Usually, I cramp up during the game,” he said. “But I didn’t feel anything at all out there. I felt great. I was not even tired, to be honest.”

Adelman is used to being on the field for nearly every snap. He starts at cornerback and punt returner and is the snapper for punts and PATs. Adelman did not play defense on Friday night because Gonzalez knew he was going to get a lot of carries. Of course, he never pictured it being 45 carries.

“Not a chance,” said Gonzalez, noting that starting quarterback Tristan Hughes was out with a finger injury and that led to more attempts for Adelman. “It just came down to the fact that we thought we had an advantage on a particular play so we kept running it over and over.”

For the first time, Adelman spent the summer conditioning in a speed program called “Step Academy.” Adelman is taller than most running backs, but Gonzalez thinks his 6-1 frame can be deceiving to defenses.

“He has the power, but he is also extremely fast,” Gonzalez said. “People misjudge his speed and agility. He is pretty darn talented.”

Adelman describes his style in a similar way.

“I think of myself as an elusive, bulldozing guy,” he said. “I will juke you first, but I will run you over when I have to. And, of course, I love to get in the open field.”

He nearly broke free on a few runs Friday night, but a few shoelace tackles tripped him up.

“I had a lot of chances to break loose with 45 carries,” he said. “But their defense just had so many guys playing deep that I just couldn’t break it.”

And that’s just fine with Adelman. He may love breaking free, but with his extra conditioning, he makes sure his body is ready to pound, pound, pound.