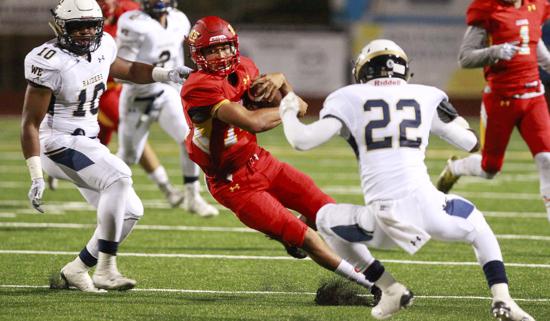 MISSION VIEJO — Cathedral Catholic has been a regular participant in the Honor Bowl as well as hosting Brothers in Arms games twice.

When the Honor Bowl left the county this fall after a three-year run at Oceanside High, the Dons wasted no time in remaining part of the program, even though it meant traveling to Mission Viejo for a game against defending state champion Modesto Central Catholic on Thursday night.

If Cathedral coach Sean Doyle has his way, his team will participate in the military-themed Honor Bowl or something similar from here on out.

“Every team in these kinds of tournaments are really good and those are the kinds of teams that excite our players,” said Doyle. “The players get a chance to see where they are. We want to get ready for (Western League) play.”

Doyle has even hinted that Cathedral might investigate the possibility of sponsoring its own version of the Honor Bowl in the near future.

“I think there are some worthy places we could partner with,” Doyle said. “We could stick with the military since we’ve had quite a few kids of military parents over the years.

“We could easily do it ourselves, but we won’t really get serious about this until after the season.”

The Honor Bowl donates proceeds to aid wounded military veterans in their recovery with an eye toward a return to civilian life. The sponsoring Honor Group has purchased all-terrain wheelchairs as well as service dogs to help wounded vets.

Ranked No. 3 in the San Diego Section, the Dons (2-0) got a pair of touchdown passes from senior quarterback Tate Haynes. One of those TD tosses went to senior Jordan Genmark-Heath, who also rushed for a touchdown.

Haynes, who has committed to Boston College, was named the Dons’ MVP for the game for the second straight season.

“It’s important to give back to the military whenever you can,” said Haynes, who rushed for 67 yards, including a 16-yard TD, and passed for 96 yards. “Coach Doyle is passionate about this and it’s amazing to play for something bigger than just another game.

“This is a good team win in the end and we’re all better off for playing in a game that is so special it doesn’t feel like just another game.”

Genmark-Heath’s 1-yard TD run with 7:38 left in the third quarter put the Dons ahead 28-10, but a rash of penalties — 13 for 119 yards — led to a pair of Montell Bland scoring runs, cutting the deficit to just three points in the final minutes.

Central Catholic (1-1), which won the Open Division-Small Schools title last season, did not get another scoring chance.

“They aren’t four-time defending state champions for nothing,” Doyle said. “We made too many mistakes, too many penalties, just like we did a week ago in the opener.

“It is a quality win. It’s just that I hoped we’d play better.”

The experience of playing to honor the military was a win-win moment for the Dons.

“As soon as the Honor Bowl people called, we were in,” Doyle said. “I can’t say enough good things about this event. It’s a great thing for everyone involved.”

It might even be better for Cathedral Catholic if the event were sponsored by the Dons.