Knights move to 2-0 with lopsided nonleague victory over Patriots 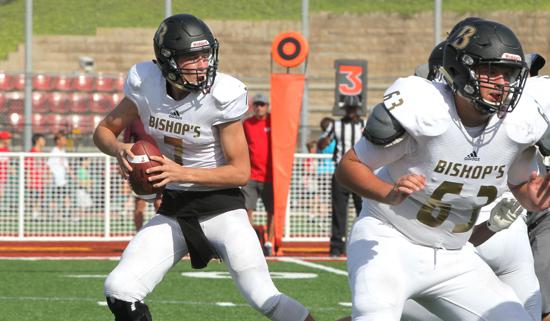 The Bishop’s School dominated Patrick Henry on both sides of the ball Friday and romped past the Patriots 63-0 in a nonleague game at University City High that was played with a running clock in the fourth quarter.

The Knights, who have now won their first two games for the fourth straight season, put the game away in the first half, scoring three first-quarter touchdowns, then adding five more in the second period

The entire first quarter was played in the Patriots’ half of the field. Bishop’s senior Justin Woodley recovered a Patriots fumble in the end zone, and junior Mozes Mooney scored on a 2-yard run and a 23-yard reception.

Three more TD passes from Bishop’s junior quarterback Jeffrey Jackson — two to his brother, junior Jacob Jackson — a 75-yard interception return from Mooney and a 12-yard scoring run from junior running back Hasant Moses-Hillman made it 53-0 at the half.

Jeffrey Jackson — who had four touchdown passes in a win over Santana last week — threw for 164 yards and four scores against Henry, all in the first half. Freshman Amaan Banks led all runners with 94 yards and scored a 12-yard, third-quarter touchdown, and Moses-Hillman (112 yards last week) ran for 93 yards in two-plus quarters.