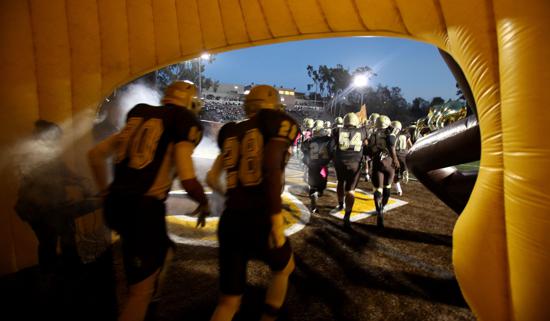 Serra will go for its second win of the season against Escondido on Sept. 16.

SAN YSIDRO — Serra jumped to a 20-point lead in the first quarter and never looked back as it dominated San Ysidro 41-0 on Friday for its first football win of the season.

The Conquistadors (1-1) had a few offensive stars, none bigger than junior running back Bryan Pratt. The 5-foot-6, 150-pound tailback scored four touchdowns in the first half, highlighted by a 97-yard sprint just before the break.

Pratt finished with nine carries for 146 yards and three scores — in addition to a receiving touchdown. He did not play in the second half.

Conquistadors senior quarterback Joaquin Quintana-McKinney was solid and consistent all game, avoiding turnovers while keeping the offense organized. He completed 4 of 9 for 75 yards and a touchdown.

Serra’s defense also shined in shutting out the Cougars (0-2). Defensive backs Lorenzo Lovato and Dustin Minnich had interception returns for touchdowns in the first half, and the Conquistadors dropped at least four more picks.

San Ysidro’s offense struggled throughout, unable to match its rowdy crowd’s enthusiasm for its home opener.

Cougars running back Jeremiah Martinez had 13 carries for 66 yards.

Serra, which has matched its win total of last year, is off next week before hosting Escondido on Sept. 16.