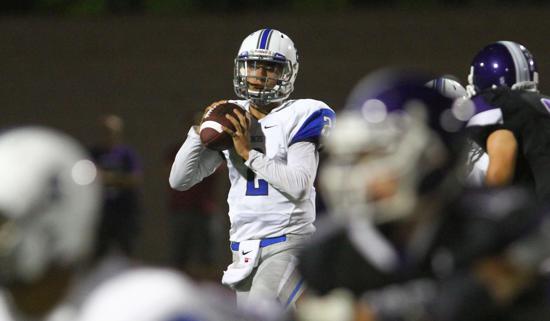 Mark Salazar rolled left and fired a bullet into the arms of Leo Wagner for a 10-yard touchdown and Kaelan Pestano raced 65 yards for a score late in the fourth quarter as the Rancho Bernardo football team escaped with a 28-17 victory over visiting El Camino in a nonleague game on Friday night.

The defending CIF Division 3A state champions trailed 10-0 in the third quarter and 17-14 late in the fourth before two turnovers by the Wildcats helped them to their second straight victory.

The Broncos’ Jackson Murdock jumped on a fumbled snap by El Camino on the Wildcats’ 18. Three plays later, Salazar found Wagner for a 10-yard TD for a 17-14 lead with 2:27 left. Rancho Bernardo’s Anthony Walsh then intercepted a pass to set up Pestano’s game-clinching 65-yard touchdown run.

The Broncos (2-0) trailed 10-0 in the third quarter before scoring 14 unanswered points to take a 14-10 lead. Pestano scored first on a 10-yard run and then Malcolm Ross-Turner made a spectacular leaping catch over a defender for a 30-yard score. Ross-Turner had five catches for 86 yards and the TD.

It didn’t take long for El Camino to answer as Chris Brown scored on a 2-yard run to make it 17-14 El Camino with 9:14 to go in the third quarter. Brown finished with 24 carries for 202 yards, including a 49-yard score.