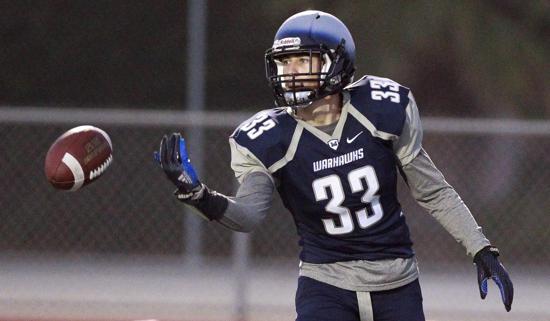 Madison's Brandon Lewis tosses the ball to an official after catching a touchdown pass against Steele Canyon.

Sometimes looking at a score can be deceiving.

For example, Madison lost to Vista Murrieta 21-9 last week, appearing to be just another San Diego Section football team that struggled against a known Southern Section and state Top 10 team.

“Struggled” wasn’t accurate, though, as the Warhawks led the game 9-7 on the road with eight minutes to play.

“That was a game we could have won,” Madison coach Rick Jackson lamented of the lost opportunity. “But as they say, a loss is a loss.”

The Warhawks dropped just one place in the section Top 10 to No. 7 and showed they belonged at least there if not higher after downing highly respected Steele Canyon 48-7 on Friday night in their first home game of the season.

Quarterback Terrell Carter completed 14 of 16 for 232 yards and five touchdowns with Brandon Lewis on the receiving end for seven of those passes for 153 yards and three TDs.

And that was just the first half.

Jackson emphasized before the game that the Warhawks needed to put points on the board and they had no trouble doing just that, scoring on five of their seven possessions, fumbling away the other two.

Carter hit Lewis for TDs of 48, 22 and 26 yards, connecting on his first 10 passes before an overthrow. Lewis did his part elsewhere, too, returning a punt 44 yards to set up the final score, a 10-yard TD from Carter to Erick Buchanan.

“Our skill guys are as good as any we’ve ever had,” said Jackson, fully aware that all-section athletes like Robbie Rouse and Kareem Coles were superior talents. “Now we have to keep on getting better.”

Carter only tossed one pass in the second half, completing it for 12 yards, as the Warhawks scored seven seconds into the fourth quarter, resulting in a running clock the balance of the game.