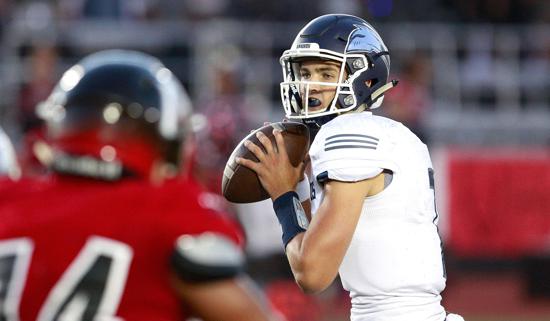 SAN MARCOS — Pop Warner players in San Marcos got a look at what a good offense looks like.

But it took a defensive stand late in the third quarter when the Barons had a chance to close the deficit to seven points to allow the Knights to stave off a comeback by the visitors.

Bolin, who threw a 66-yard TD pass to Kyle Phillips after the defensive stand to return the momentum to San Marcos, finished the game with 268 passing yards after, at one point, completing 14 consecutive passes for 223 yards in the first half.

San Marcos held the Barons to 30 total yards before halftime while the Bolin-led offense rolled up 303 total yards.

Bonita Vista, which was troubled by four bad snaps over the quarterback’s head in the first half, trailed 23-0 before quarterback Anthony Posada, who passed for 202 yards last week against Poway, connected with Roberta Cota on the first of two TD tosses to Cota.

After punting on their first drive, the Knights got a 14-yard run by Tyler Rogers, TD passes of 21 yards to Daniel Engebrits and 81 yards to Tyree Hodson and a 20-yard run by Josh Bornes for touchdowns in the opening half.

Miles Liss booted a pair of field goals to complete the first half domination by the Knights.