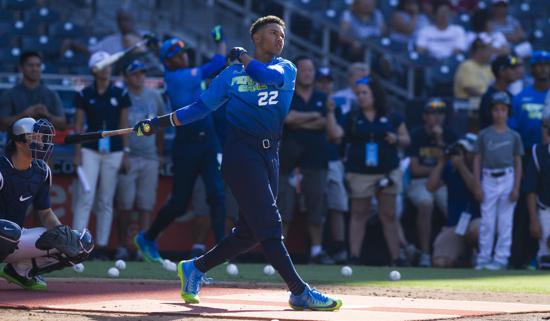 Professional baseball scouts covet it, travel the nation looking for it.

Few players have it.

Calvin Mitchell, however, is one of the few.

The left-hander dazzled scouts with long balls at this summer’s Area Code Games in Long Beach, where he played on the undefeated Brewers team and had a two-run, game-winning single in the bottom of the seventh of the final game.

And he finished second to Hunter Greene in the Home Run Derby at the Perfect Game All-American Classic at Petco Park.

Greene, a shortstop/pitcher from Notre Dame High in Sherman Oaks, is being touted as the top pick in the 2017 MLB Draft.

“If you’re a pitcher, you don’t dare leave a ball down and in because Mitchell hammers that pitch,” a scout said. “He’s not a big kid (6-feet-1, 210 pounds), but he generates great bat speed. And bat speed translates to power.”

Starting today, Sept.11 he’ll be in Houston along with right-hander Kyle Hurt of Torrey Pines and shortstop Nick Allen of Francis Parker for the USA Baseball U18 National Trials.

All three players survived the first round of cuts that trimmed the roster from 108 players to 40.

Allen has dazzled scouts all summer with his defensive ability.

The final cut to 20 players comes ThursdaySept. 15. Of the 40 players in Houston, 19 played in the Perfect Game in San Diego.

Those 20 will represent the U.S. in the COPABE Pan American AA Championship in Monterrey, Mexico, from Sept. 23-Oct. 2.

“I’d be very honored to make that final cut,” Mitchell said. “How cool would that be to represent the USA?

“The best talent in the country will be at this final cut. But it’s reassuring to know that all the hard work, all the money my parents have spent on me, is paying off.”

Mitchell said he has been on the travel ball circuit since age 11, playing mostly with Team Full Gorilla, which is run by Adrian Stewart, the son of former big-league pitcher Dave Stewart.

“That group has been a big part of my development as a player,” Mitchell said. “They stress thinking, strategy.

“They want their players to have an academic approach to the game, to have a game plan, to rely on their training and work ethic.”

What Mitchell has learned, along with his natural ability and power, has put Mitchell in the national spotlight.

He has committed to play collegiately at USD and pro scouts project him as a top-five-round pick in the 2017 draft.

“Plus, I can go line-to-line, so I think I’ll always hit for a good average.”

Scouts say the things Mitchell needs to work on are his speed and arm strength, both of which are considered average.

“Right now, Mitchell has one way-above-average tool — power,” said a scout. “His other tools aren’t bad, at least average. But we’d like to see him develop into a multi-tool guy.”

Mitchell had multiple college offers, but chose USD because of his deep-rooted connection to the university.

“My grandpa (former UCLA star and Lakers first-round pick) Brad Holland coached basketball at USD for like 13 years (winning 200 games),” Mitchell said. “So I was around the USD program since I was little.

“When I got an offer, I didn’t have to hunt for anything else.”

Now he’s in the hunt to represent the USA on a team that won the WBSC 18U World Cup in Japan last year, led by La Costa Canyon’s Mickey Moniak, the first pick in the 2016 MLB Draft.

“I took some time off after the Perfect Game in San Diego,” Mitchell said. “I needed a mental break.

“But I’m ready to go now, ready to come on strong and show what I have in Houston.”